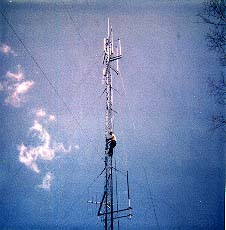 WA1LMV/R Tower with me at the 60 ft. level. Picture at right.

I am a licensed Amateur Radio Operator (Advanced Class License) and repeater builder.  I was licensed as a novice 1969 and held the call sign WA1LMV since 1970.  In 2016 I applied for and received the vanity callsign W1RHS.  Besides operating voice modes I also communicated with other hams using Teletype machines back in the 1970s.  My first Teletype was a Model 15.  [Model 15 You Tube Video] Can you imagine using one of these in a rented appartment?  I also had Model 19, 28ASR and 35ASR machines. [Model 35 You Tube Video]  I had the special service tools and was pretty good at repairing all kinds of problems.  You know these are old because they print in upper case only!  I have built and operated several VHF and UHF repeater systems throughout central Connecticut. I was one of the 6 Meter repeater pioneers in Connecticut with WR1AIB on the air in 1978. I developed custom repeater control logic that evolved into a personally designed microprocessor based controller. I wrote the microprocessor software myself which consisted of 170 pages of Z80 assembly language instructions.

Today my friends and I are using the latest digital communications technology.  See my Digital Ham Radio Pages.

WA1LMV/R
Burington, CT
On the air in 1978 as WR1AIB. Burlington Site decommissioned March 2003

This repeater used a custom designed and built 8085 controller. The hardware and software is full-featured. The controller supports speech, accessories, time scheduling, autopatch with speed dialing, radio and landline control, remote bases, diagnostics, video display terminal, and much more. I can even turn on the flood lights at the repeater site.

Here is the source code in case you are interested.

Here are the features in detail:

During the winter of 2003, the tower guy wires were hit by a tree branch that had fallen during an ice storm. The guy wire broke and the tower came down. Fortunately nobody, including the residents of the associated house were injured. The tower fell in an optimal direction. Now it's time to clean house at the site to make way for paying customers.

Thanks to my friend Don Nelson, K1ZSG, for his assistance and generosity for all these years. 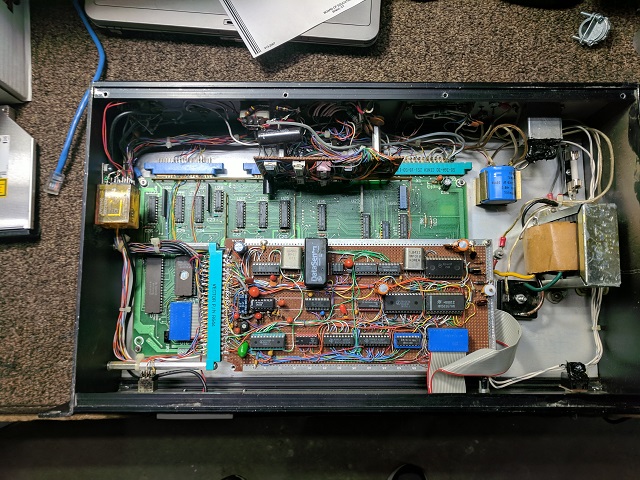 Here is the top view of the controller.  It is a surplus single-board 8085 based computer with a 5 Mhz clock.  It was removed from a Kodak Ektachem Blood Analyzer during a modification. The board can accept an 8K, 16K or 32K EPROM and has 4K of Static Ram, a Programmable Interval Timer (PIT), a Programmable Peripheral Interface (PPI), a Programmable Interrupt Controller (PIC), a Universal Synchronous/Asynchronous Receiver-Transmitter (USART), four 8-bit output ports and three 8-bit input ports (not including the I/O ports on the PPI).  Above the main board is a custom I/O expansion board with a time-of-day clock with battery backup, a touchtone decoder, a touchtone encoder/decoder, watchdog timer, tone generator, several I/O ports and a phoneme-based speech synthesizer. 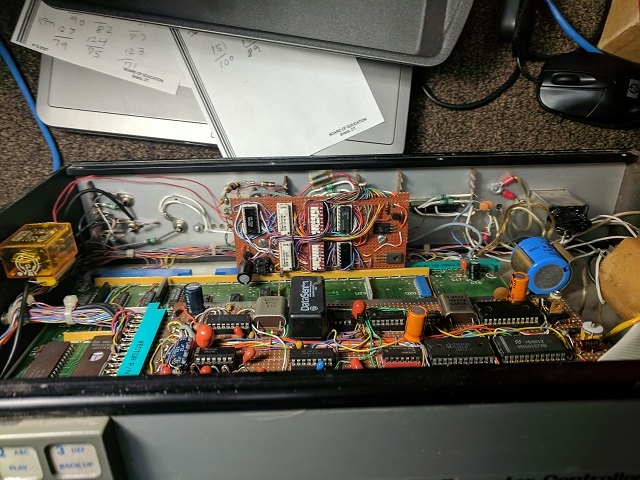 On the back edge of the cabinet there is a small analog-to-TTL input board.  This board has transitor arrays in 14 pin DIP packages, pull-up resistors, inverters and DIP switches.  This is a universal receiver to controller interface.  Each input is a 0 to 15v input which produces a 0 to 5v TTL signal.  The DIP switches can program an inverted signal polarity.  This is used to connect the receivers' COS, TOS and other signals to the controller. 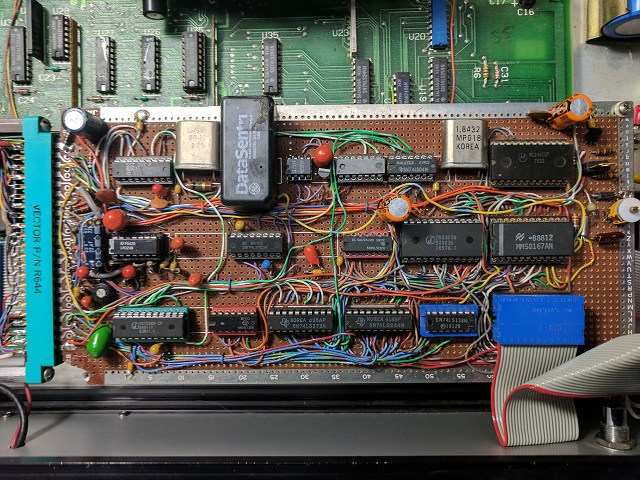 This is a close-up view of the expansion board.  There's a baud rate generator for the CRT Terminal RS232 interface.  In those days it was easy to just plug in a dumb CRT terminal to display controller information. There is a Touchtone decoder IC and a Touchtone encoder/decoder IC.   One decoder was dedicated to listening on the phone line.  The other listened to the radios.  The phone decoder had priority so that phoneline control would be able to override any radio signals.  There is a time-of-day clock with battery backup and a phoneme-based speech synthesizer.  Because the spoken words are formed with phonemes (sounds) the vocabulary is unlimited. 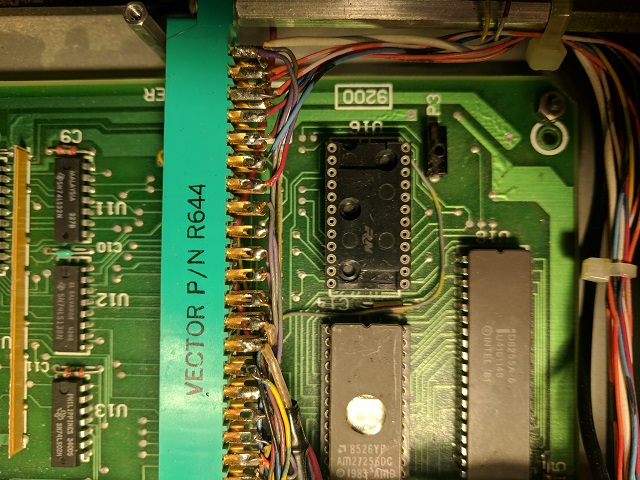 In order to easily interface to the main board I soldered a 28 pin DIP socket to the top of the static RAM chip.  This gave me address, data and control lines that I could bring to the expansion board with a ribbon cable. 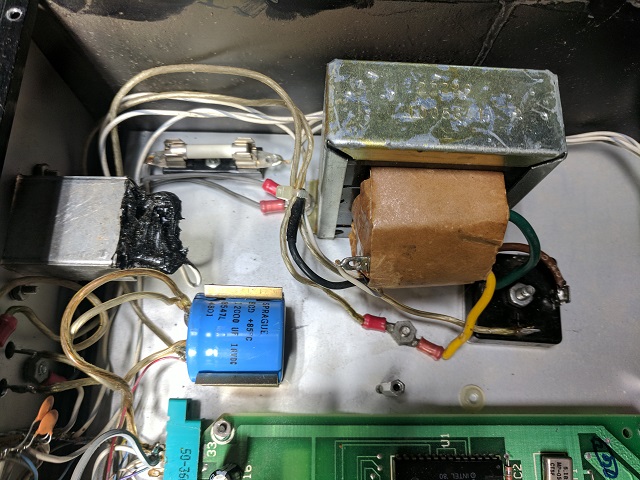 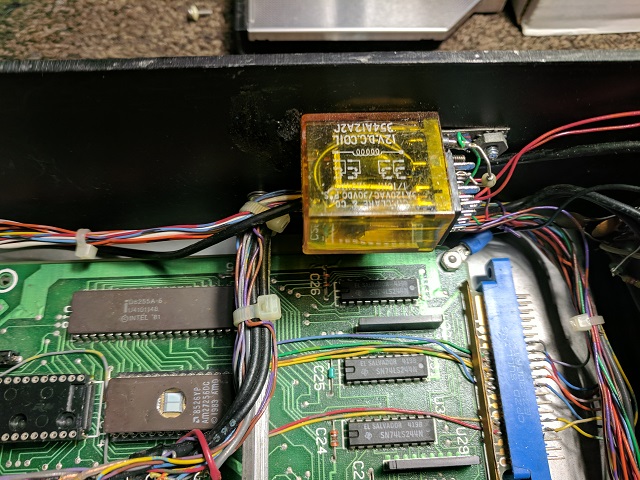 Some things could not be totally solid-state.  The only relay was for telephone line access. 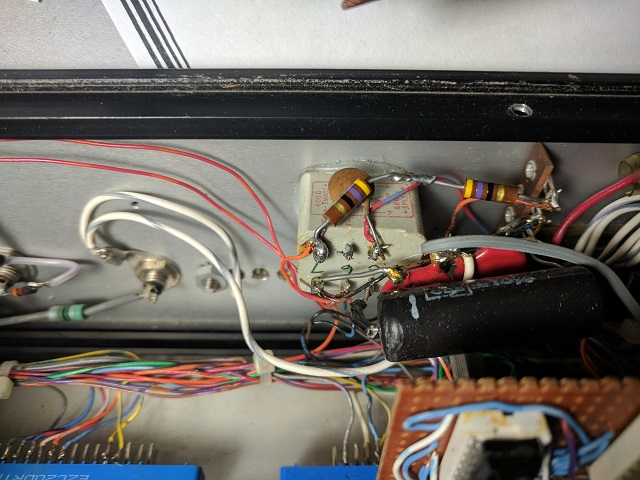 Besides the power supply transformer there was one other transformer, a 600 ohm one to interface to the telephone line. 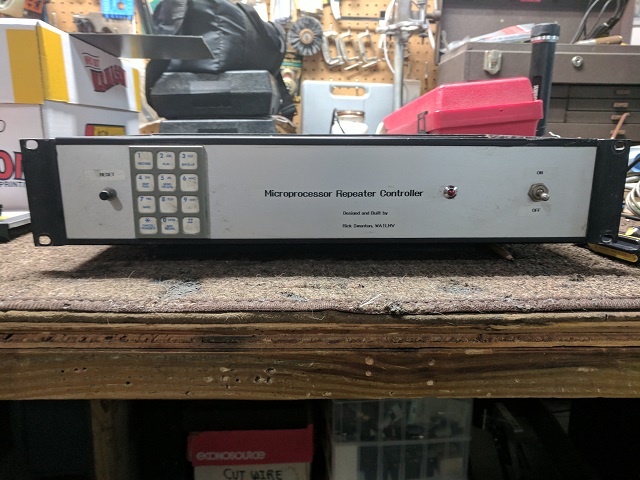 Finally here's a picture of the expansion I/O board.  Notice the 28 pin DIP socket in the lower right.  That's where the ribbon cable plugs in and connects to the corresponding socket on the CPU board.

Here are a few pictures of the decommissioned equipment arriving at my house along with some old pictures of when the system was in service. 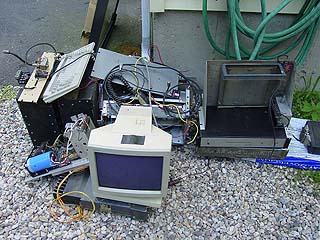 Two 20 AMP power supplies (left) under the keyboard, the CRT monitor (center), the RCA Series 1000 Low Band Transceiver below the CRT, and the controller and mixer (right). 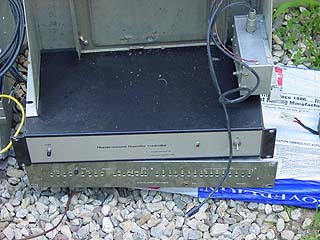 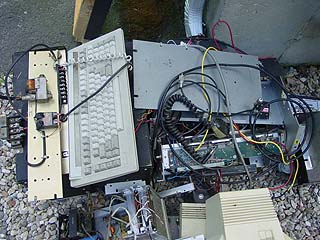 Top View of the heap. 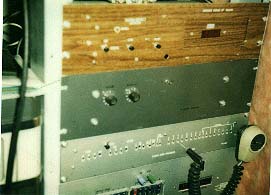 A "pre-micro controller" picture of the rack sometime around 1990. At the top is a custom antenna rotator controller that runs an Aliance U100 motor. It takes commands from the logic system and can position the motor from 0 to 360 degrees in 10 degree increments. Next is a rack mount RCA SuperFleetfone low band receiver followed by the 16 channel audio mixer.  This custom designed audio mixer actually contained the receiver squelch gates which were solid state switch ICs. 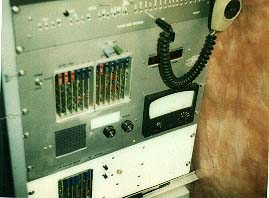 Before the microprocessor controller, there were 15 logic boards controlling the system. From top to bottom: The 16 channel custom audio mixer, two banks of 5 logic boards. The first 5 are the repeater logic, the second 5 are the control system. A bank of 5 more boards in the white panel were expansion functions. The binding posts above the main logic rack are +5V and GND for the Logic Pen. (Remember those?) I had a board extender so I could operate each board extended out of its slot for troubleshooting. 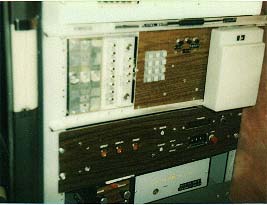 The older system had a Teltone 3-board DTMF decoder and a Wescom Hybrid for the Autopatch. Below that is the two meter remote base consisting of a Standard HT transceiver board and a GLB Synthesizer interfaced to the repeater logic. Last is the GE MASTR Royal Exec transceiver, the original 6 Meter repeater receiver and transmitter for 52.01 / 53.01 MHz. 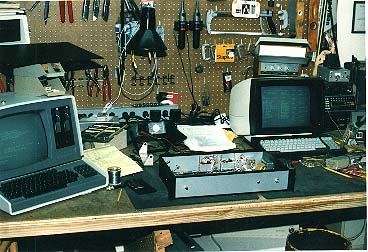 Development of the new controller hardware. The controller could accept control input simultaneously from the CRT keyboard, two radio receivers and the phone line. Software was written on the Heathkit H89 computer in Z80 Assembly Language.  The 140 page program assembled down to 17 kilobytes to fit in an EEPROM.  I built an EEPROM programmer to work with the H89 computer.  I built an EEPROM eraser using an ultraviolet bulb intended for a bathroom germicide device.  These bulbs look like florescent bulbs but with a clear glass envelope.  There's no white frosting on the inside. 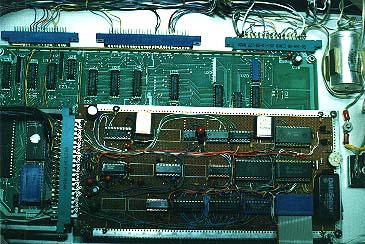 Inside view of the controller. The computer board (the lower one) is a control board from a Kodak blood analyzer. It has an 8085 µP running at 5 MHz, up to 64K of EPROM and plenty of I/O ports. The upper board is the additional circuits that add two DTMF decoders, a DTMF encoder, speech synthesizer, time of day clock, watchdog timer and audio tone circuits. 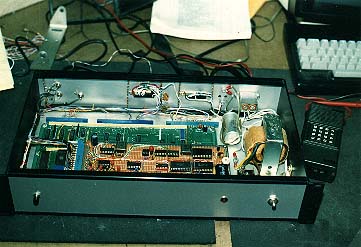 View of the controller under construction.  Notice the Icom IC-4AT handheld radio and the ADDS Viewpoint terminal on the right. 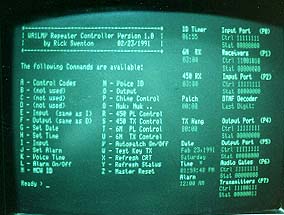 Screen shot of the video display from Feb. 23, 1991. Notice the single letter control command menu, the display of the various timers, and the display of the I/O port signals shown as ones or zeros. When the controller was running, this screen provided a real-time display of the various signals.  The ID Timer, receiver Time Out Timers, the Transmit tail timer and date and time all showed updating on the screen.  The ones and zeros on the right side reflect the various signals like receiver COS, TOS, PTT and more.  Each set of signals had two rows.  The top row is the control bits.  The bottom row is the status bits.  The status bits come on and off as the inputs change or as the controller changes output bits.  However, the signal will only be processed if the control bit above the status bit is set by the control system.  The control system can enable or disable any individual signal by changing the control bit.  The display was an ordinary dumb serial terminal running at 19,200 baud. It looked like a video raster because I performed direct cursor addressing with the cursor display disabled. 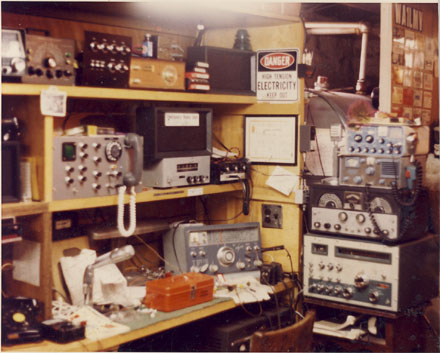 Here's a blast from the past. This is my Ham Radio Shack as it appeared in 1973. Starting at the top left corner is a barely visible Heathkit Mohegan shortwave portable. Next is a Heathkit Signal Generator. The black panel with the six knobs is a stereo tube type homemade amplifier connected to the adjacent Scott FM tuner with a homemade stereo demodulator. On the middle shelf is a homemade oscilloscope and phone patch console, a low band 30-50 MHz tunable monitor, and a Glalaxy three channel cyrystal controlled 2M FM transceiver. On the bench is a National NC-76 Ham Band receiver. On the table on the right is a Polycom 6M AM transceiver, an SBE-33 Low Band SSB transceiver, A Halicrafters SX-99 Shortwave receiver and finally a Heathkit Marauder low band SSB transmitter. Under the bench visible behind the chair is a Collins 32V1 low band AM transmitter. Thank God my Dad was generous with the precious space in his small workshop! 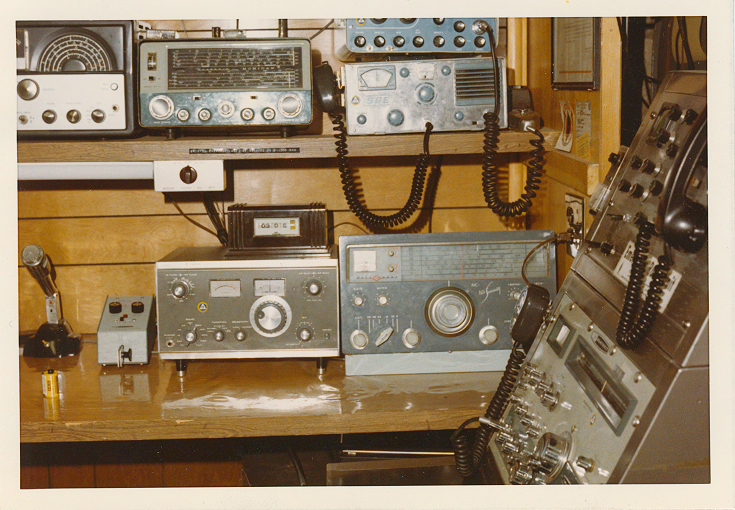 Later I installed some of the equipment into a nice 19 inch rack cabinet/desk on the right.  Notice the Heathkit electronic keyer and the mechanical 24-hour digital clockm set to GMT, of course.  This was a nice station in its day.  It was all used equipment when I got it. On the top shelf, L to R, is a Hallicrafters SX-99 shortwave receiver, a Heathkit Mohegan portable shortwave receiver and an SBE-33 80 through 10 meter SSB base/mobile transceiver.  On top of the SBE-33 is a Polycom 6 six meter AM transceiver belonging to the city's Civil Defense.  On the bottom shelf is a Trio receiver (before they changed the name to Kenwood) and a National NC-76 receiver. 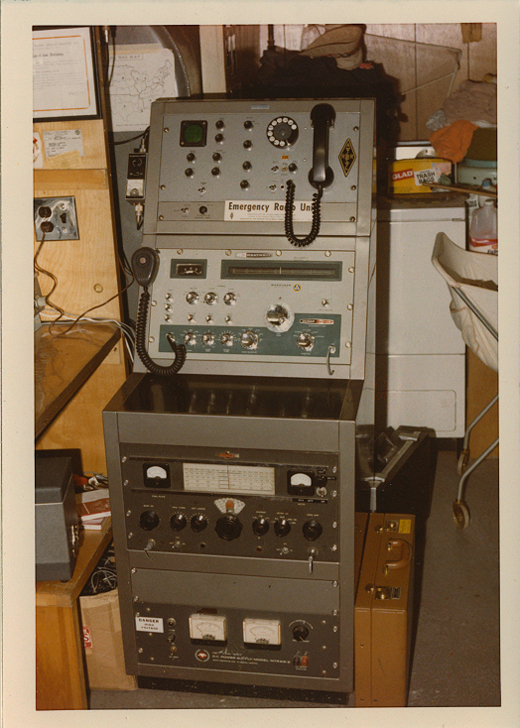 This is the transmitter array with the Heathkit Maurader and the Collins 32V-1.  The home-made oscilliscope and phone patch are at the top. An adjustable regulated power supply is at the bototm. 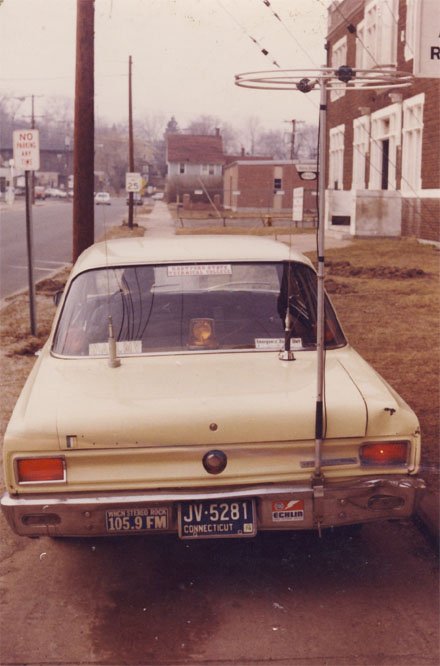 Well, well, well. When I was a member of the Bristol CT Civil Defense we operated a 6 meter AM net and I operated from the car. I used a Halo antenna mounted on the bumper of my prestigious 1967 Rambler American. I actually commuted to college and was seen in public with this car. Eventually by brother repaired the accident damage and repainted the car the same yellow color.  During one summer I replaced the engine in this car at the high school auto shop with the help of the shop teacher. 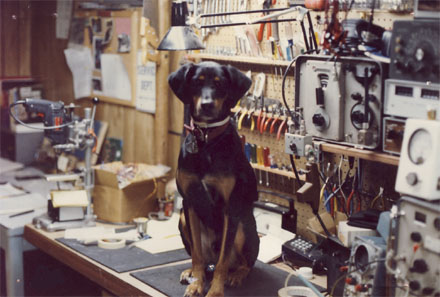 Here's the workbench around 1978 along with my first dog, Brownie. You can see the Motorola signal generator on the top shelf and the Motorola service monitor on the bottom. By this time in my life I became rather proficient in servicing commercial two-way radio products. Around 1978 I assisted the local radio shop with the transition of the Bristol CT Police Dept. from Low Band (39.42 MHz) to 800 Mhz.