So you are at this point again when your Service Engine Soon (SES) light comes on reporting that you have yet again a new problem with your car's engine. 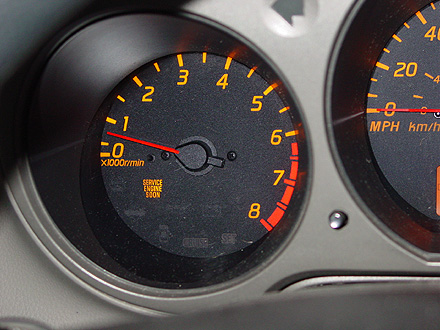 You wish you had one of those expensive code readers your car mechanic or the dealer has.  You wish you could download the error codes from the Engine Control Module (ECM - the car's computer) so you can seacrh the problem online and see if you can find a do-it-yourself (DIY) solution.  You don't want to have to drive to Auto Zone again to have them read the codes for you.

Well now you can, if you have an Android phone. 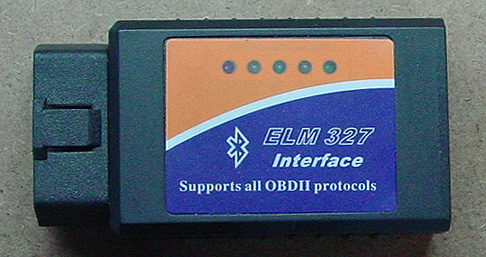 You can purchase one of these OBDII (On-Board Diagnostics version II) interfaces for about $40 on Ebay.  This is a self-contained module that plugs into your car's OBDII connector (usually found under the dash).  It gets its power from the car and connects to your Android phone wirelessly over Bluetooth. 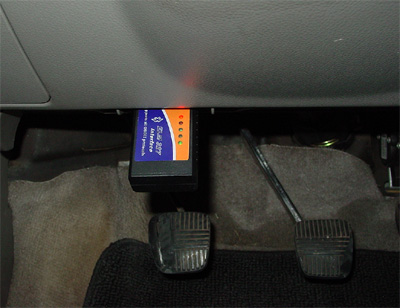 This is what it looks like plugged into the car's diagnostic connector under the dash.

You download a free app (application program) from the Android Market called Torque [http://torque-bhp.com ], configure your phone to pair with the OBDII interface, start the Torque application and start exploring. You can read error codes.  If you click on a reported code the application launches a browser and takes you to an explanation of possible causes of the code.

The Torque application also allows you to directly monitor the ECM and retrieve various information from the sensors connected to it as well as use your phones internal GPS and accelerometer sensors to graph other information such as acceleration.  You can even upload live data to your webserver or the torque web viewer in realtime.

In my case I am getting the error P0335.  An internet search reveals this is a problem with the engine's Cam Sensor.  There is another sensor on the crankshaft and folks recommend changing them both at the same time.  The kit with both sensors is about $50 after shipping.  The total dealer repair cost could be as high as $200.  Looks like another adventure under the hood for me in a few days! 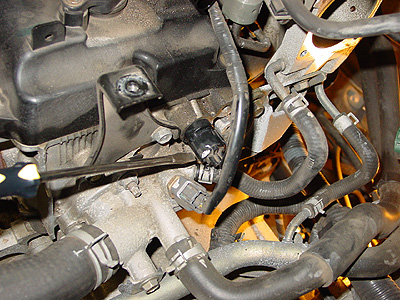 On Christmas Day after the family left for the second half of their Christmas vistt I had some free time to tackle the sensor replacements on the Nissan.  The Code P0335 was listed as Cam Position A Sensor error.  A search on the Internet revealed this to be a fairly common problem and I found a Nissan part number for a kit of two sensors.  Nissan recommended replacing both the Camshaft and Crankshaft sensors at the same time.  The picture above shows a screwdriver pointing to the cam sensor with the electrical connector still attached.  This is lookiing at the driver's side view of the engine with the top cover, air intake hoses and mass airflow sensor housing removed. 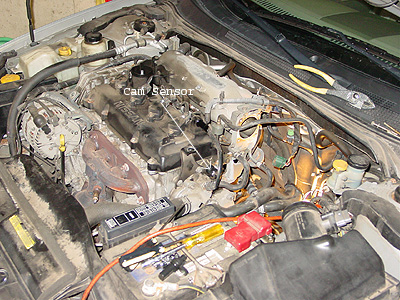 Here's a wider angle view of the location of the cam sensor.  You don't need to remove the mass airflow sensor to get at the cam sensor.  I needed to do this to get my arm in the back of the engine to replace the crankshaft sensor. 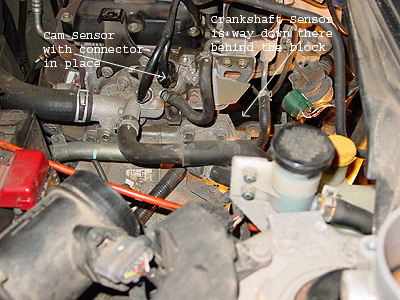 These sensors bolt to the engine block with a single 10mm hex bolt.  It was easy to remove the bolts once the connectors were removed.  Changing the cam sensor was a snap.  The crank sensor was another story entirely.  You can not see the crankshaft sensor, except for a glimpse of it when viewing through the rear hoses and tubing at a certain angle.  After I removed the mass airflow sensor housing I could get my arm around the back of the engine and could feel the sensor and mounting bolt.  You can't get to this sensor from under the car using a lift.  The transmission is in the way.

Another internet search revealed folks using a flat blade screwdriver to release the clip on this connector.  They did not clearly explain with words exactly how this worked.  Once you figure it out it's so simple.  Because you can't get two hands in back of the engine to hold down the clip and remove the connector, Nissan made the release clip on this connector to be self-holding.  If you press the clip with a screwdriver toward the sensor it clicks in the released position.  Now you can grasp the connector without having to hold down the clip and wiggle it off the sensor.

Now that I had the connector off and the bolt removed the sensor would not come out of the block.  After some head scratching I decided to try to rotate the sensor in the block.  It rotated freely and I was able to gradually wiggle it out.  These sensors have o-rings to seal them to the block to prevent oil leaks.  After 8 years the o-ring hardens and the seal is a little tight. 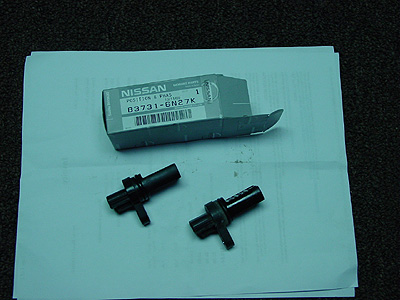 Here's a photo of the two sensors.  They look identical but they are not.  The crankshaft sensor has a dot of white paint!

Replacing the sensors was a rewarding experience, especially after the engine started and ran smoothly.  The second thrill was clearing the error code, going for a test drive, and not having the code return.  The third thrill was the knowledge that I did not have to call my good friend, Bill Coviello, (my life-long car technician) to un-do the damage I caused!