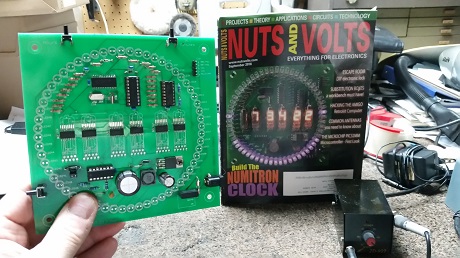 The September 2016 edition of Nuts & Volts had this very interesting electronic clock project.  As with many modern designs it uses a PIC Microcontroller (Peripheral Interface Controller) which means it's a small computer chip.  The author designed a two sided circuit board with several surface mount components including the PIC and offered a pre-programmed PIC which makes things easy for me.  The coolest part of this clock is that it uses Numitron tubes for the display.  Back in the day we were fascinated with Nixie tubes.  These were neon filled cold-cathode tubes with ten wire images of the numerals 0 to 9.  When you applied a high voltage to one of the wires the digit would glow and the numeral would light up.  Numitron tubes are very different.  They are nothing more than a seven-segment display using incandescent filaments, just like light bulbs.  They do not use high voltage to light up.  They do not suffer from the Nixie tube flaws such as cathode poisioning or sputtering.  When a numeral is lit for a period of time material from this cathode sputters on to the inactive cathodes and causes uneven illumination when they are eventually lit again.  The sputtering can also coat the inside of the glass envelope and reduce the brightness of the digits.  This is usually visible in tubes that have been in service for some time.  Since Numitron tubes are just light bulbs there are no special considerations.  Numitrons have an expected life of 100,000 hours compared to the Nixie tube's 5,000 hours.  They are brighter too.  The picture above is my board waiting for the 60 LEDs and the Numitrons to arrive.  I had to buy the Numitrons on Ebay and they came from Russia.  Using Numitron tubes gives this ultra modern clock a 1970s retro look. 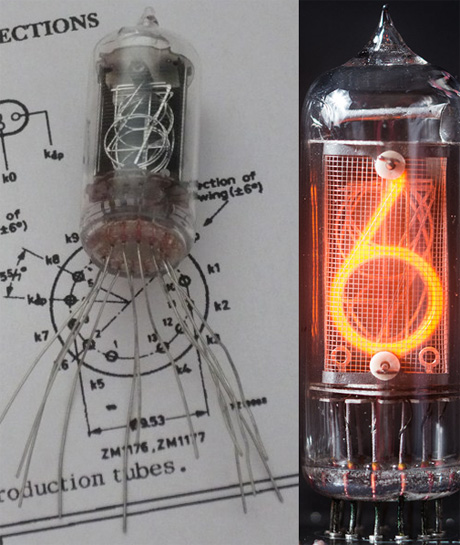 Here's some close-up views of Nixie tubes.  In the left picture you can see the individual cathodes shaped as the numerals 0 through 9.  In the right picture you can see the digit 6 energized.  An undesired side effect of Nixie tubes is called sputtering.  Particles emitted from the cathodes hit the inside surface of the glass.  The glass becomes coated and discolored.  This reduces the light output and clarity of the dispayed numeral. 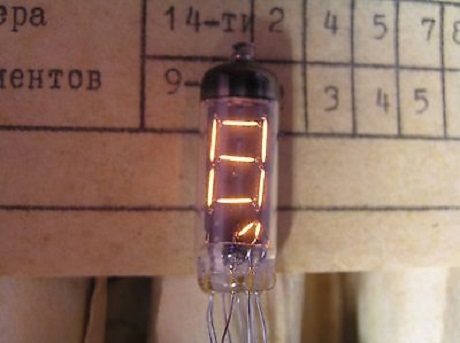 As I mentioned previously, the Numitron tube is nothing more than seven segments of incandescent filaments. They run on low voltage and light up like a light bulb.  There is an additional element for a decimal point in the lower right corner.  Because these are filaments they take time to brighten and fade away.  When you watch the time change you can notice the digits do not change instantaneously. 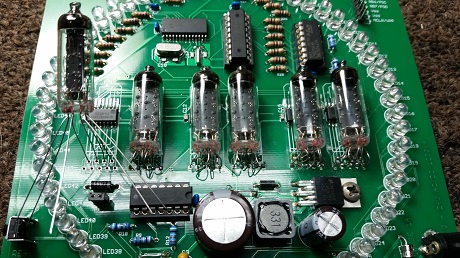 Here's a close-up photo of the board as I installed the final Numitron tube.  Installing the tubes is quite difficult.  There are nine fine wires coming from the tube base.  They have to be oriented, bent at the right angle and inserted into the proper holes on the circuit board, all without stressing the wire where it enters the glass envelope.  You can see the 60 LEDs mounted around the clock in a circle.  Underneath the tubes are the BCD to seven segment display drivers surface mounted to the board.  The PIC can be seen in the upper left. 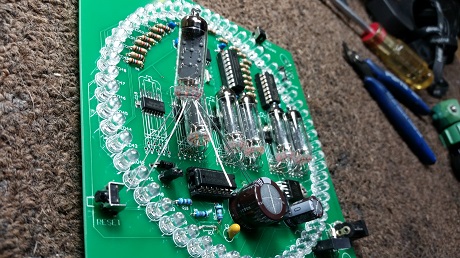 Here's a different perspective of the beauty of the mechanical layout of this clock.  The push button switch on the bottom left is the reset switch.  At the top of the board are two push button switches to set the hours and minutes.  Using different combinations of pushes you can select AM/PM mode and one of 6 LED display patterns. 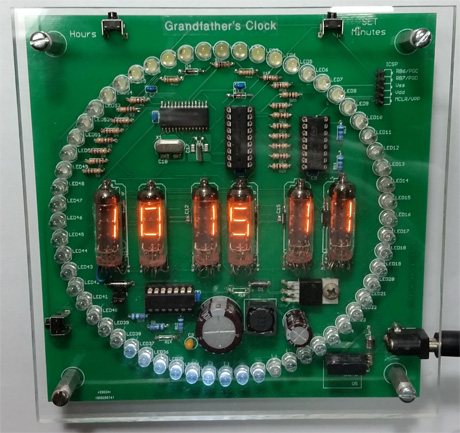 Here's my finsihed clock sandwiched between two thick Plexiglass sheets.  There are six cool LED display patterns you can select.  I prefer the pendulum display.  Another cycles around like a second hand.

Not only was this was a fun project but also the finished product is impressive and attracts a lot of attention.

You can preview the digital edition of the Nuts & Volts article here.

You can also download my personal video of the completed running clock here.