This is what my home computer lab looked like in 1990.  Most of the equipment was either built from kits or consisted of surplus commercial equipment. 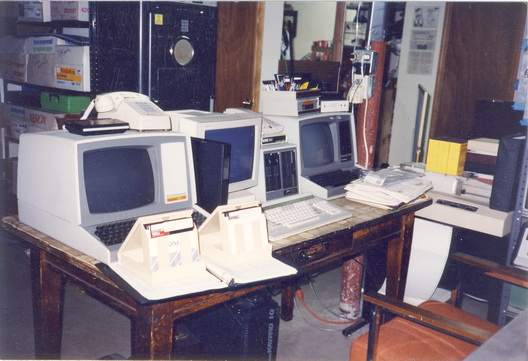 From left to right we start with the Heathkit H19 terminal.  This one was connected to a Heathkit H8 computer shown in a later photo.  The middle terminal is an ADDS 2020 terminal.  This had an amber screen with very nice fonts.  It had a flat screen and detached keyboard.  On the right is a Heathkit H89 system with an H37 floppy disk array.  This H89 was modified to contain an internal 10 MB  (not GB!) hard drive and a Xebec SCSI controller all inside the H89 AND powered by the internal power supply.  Man did that H89 run hot inside!  On the floor is a DEC LA-180 line printer.  These printers used a proprietary (almost Centronics) parallel interface.  I designed a parallel to serial converter board using an AY-3-1015D UART and a 1.8432 MHz crystal to allow this printer to work on the serial ports of the Heathkit computers. 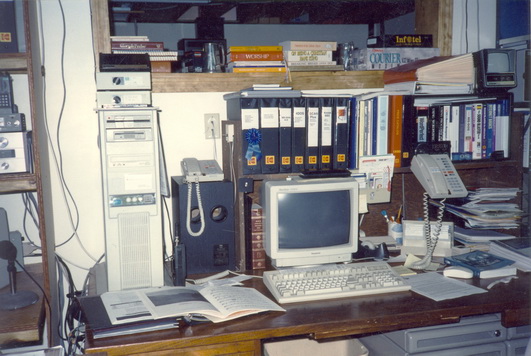 This was my Windows workstation and work desk for my day job.  Here I ran Windows 3.1 and later Windows for Workgroups 3.11.  In these days I used 14.4 and 28.8 kbps modems.  Notice the books for Wordperfect and Unix in a  Nutshell.  Internet availability was just emerging for home use.  I had accounts at work where I could connect to a dedicated system and use the internet.  This was my first experience using a browser.  That one was Mosaic!  Before Netscape!

Going back to the Heathkit area we have an Ampro Z80 system and a Heathkit H8 system on the shelves.  To the left is that DEC LA180 printer.  To the right is a Diablo 620 diasywheel printer with a dual automatic sheet feeder.  There's another H19 terminal on the desk.  For the H8 I removed the 8080 CPU board and 64K dynamic memory board and replaced them with a single, personally designed Z80A CPU board with 64K of onboard static RAM.  This was so easy using two 32K CMOS static RAM chips instead of 32 DRAM chips.  Next to the H8 is a personally designed text to speech processor.  Between the two floppy drive arrays is an X10 CP290 controller.  This was the first computer interface I used to launch my software and hardware development for home automation and control. 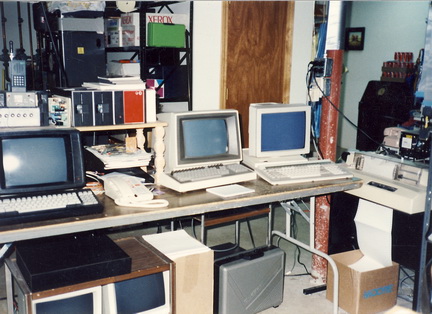 Interestingly, here's an older view of the same position with different terminals from the previous picture.  Here we have an older ADDS Viewpont terminal, a Heathkit H29 terminal and the ADDS 2020. 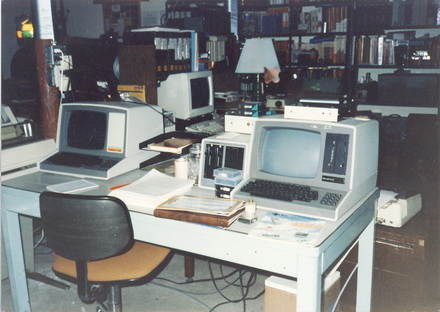 Here's that H89 with the built-in hard drive.  Most of these systems had modems and usually one was dialed up all night into a bulletin board system (BBS) exchanging programs or reading and writing messages.  In the days before the internet we connected to other computers by modems through phone lines.  We would dial other computers all over the country to check in with friends and download the latest programs.  Phone bills could be expensive.  I was lucky that I had the ability to use my company's remote access to the phone swicthboard at night.  I could dial into a special local number for the office and then out-dial to other computers using the company's WATS Lines (Wide Area Telephone Service) at night when nobody was using them. So I basically had free long distance calling. 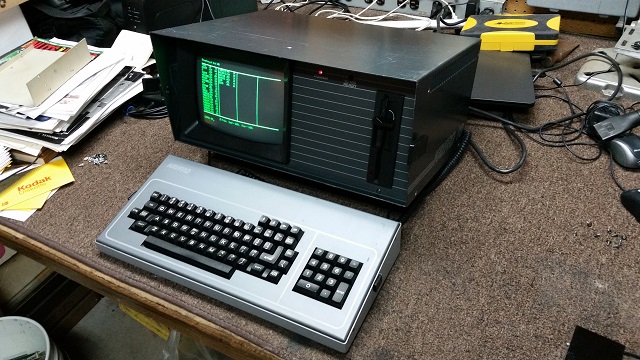 Here is a photo of my Kaypro-10. I can't remember how I acquired this nice system. I do remember it was being discarded because it was dead.  The power supply was bad and the only way to get one was to find another computer for salvage.  Fortunately at the time the computer surplus stores were selling new switching power supplies for around $35.  This one had to be a bare circuit board that would fit against the rear wall of the cabinet.  I found one with the needed voltages, current and size but the mounting holes were not right.  No problem.  I just drilled new holes in the back of the cabinet and mounted the replacement power supply with new stand offs.  Being a Kaypro-10, this unit had an internal 10 Mb hard drive.  That's MEGABYTES, not gigabytes.  In other words, it could hold data from about 10 of those 3.5" plastic IBM disks.  This computer was a Z80-B at 4 MHz with 64k of memory and ran CP/M and ZCPR3/Z-System.  It also had a co-processor board that ran MS-DOS with 1mb of memory.  That was almost impossible to get running and not worth the bother just to get DOS working. The computer had an internal SCSI hard disk controller.  I can't remember if it was a Western Digital, Shugart or Xebec.  I had so many of those controllers hanging around. The keyboard latched to the front of the cabinet so this was a portable computer that could be carried around like luggage.  You actually did lug it around because it was heavy. 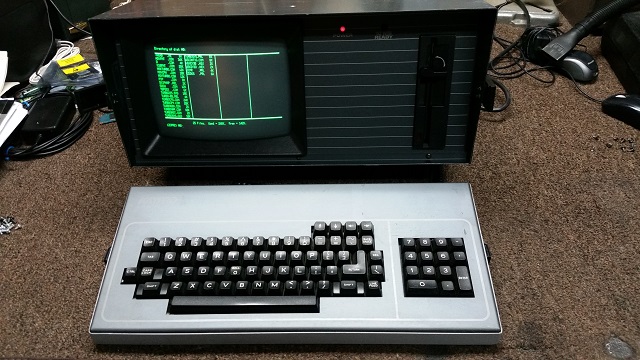 The floppy drive on the front was changed to a 96 tpi DSED drive that held about 1.2 mb of data.  I had software to emulate other vendors floppy disk formats so I could read and write to all the popular formats of the day.  The video display was amber and was character based.  Graphics were done with symbols that took the space of a character.  So you could draw crude simple patterns but nothing really dynamic or animated. The Kaypro-10 had a serial RS-232 port and a Centronics parallel printer port.  We hung a modem off the serial port to dial into Bulletin Board Systems over the phone line.  That was the precursor to the internet. There were only three circuit boards in this computer: the main board, the power supply and the hard disk controller. The video was generated with a graphics chip run by the Z80 on the main board. I think the screen memory was memory mapped meaning the CPU switched between the main memory and the screen memory as it needed to work on each.