Some time around 1973 when I was in college and working summers for the Board of Education I was asked to take on a project to rewire the sound system in the High School gymnasium.

The architects who designed the school (built in 1967) obviously had no experience with sound systems.

They installed two independent systems that were only useful if the space was divided in half. One system cabinet was installed in the boys' locker room teachers office. The other system cabinet was installed in the girls' locker room teachers office. This was fine if you needed separate systems for boy activities and girl activities when the space was divided. When the whole gym was needed you had to send a woman into the girls' locker room and a man into the boys' locker room to turn on each system. Then you needed to plug in two microphones: one into a jack on the girls' side of the gym and one into the boy's side of the gym. The cords needed to be long enough so the person speaking could place the mics together so the person could be heard in both halves of the gym by speaking into both mics at the same time. Totally amazing!

I was commissioned to remove one system from the locker room, install it inside the gym and rewire the system to operate the whole gym as a single system. This involved rewiring the ceiling speakers. 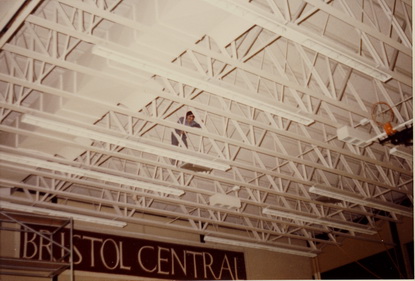 You get up there using the scaffold.  It was easier for me to walk around up there on the roof trusses than it was to have someone roll the scaffold to where I needed to be. 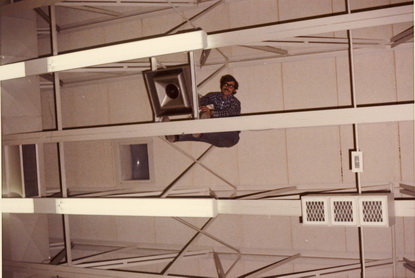 Sometimes it was a little scary to stand on a single truss while working on a speaker. 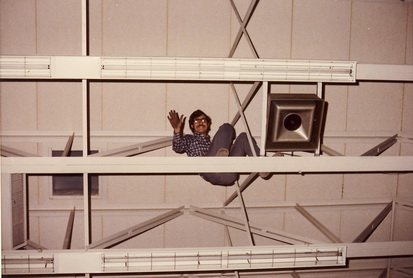 Ok.  So I took advantage of the photographer and hammed it up a little. 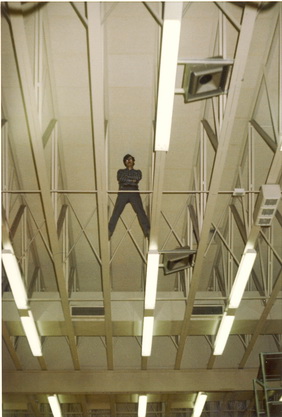 Part of the project involved redirecting the existing speakers at the people in the bleachers instead of pointing at the floor.  The other part of the project was to look good.  This project could not be done today.  There is no way a school system would let anybody do anything dangerous for fear of law suits.