For 20 years, from 1998 to 2018, as a volunteer, I was the Information Technology Director for St. Joseph Church and School, a Pre-K through Grade 8 parochial elementary school. My responsibilities for three sites include desktop systems, laptop systems, Chromebooks, network and internet, network printers, building-wide wireless, remote access, smart boards, content filtering and web sites.

It started around 1998 when people needed someone to help with single computers getting Windows running or getting them connected to the internet through a dial-up modem.  There was no turning back.  When I became involved there were 10 Windows 3.11 for Workgroup systems running under Novell Netware!  The workstations were diskless!  When these became end-of-life the school began deploying stand-alone Windows 95 and 98 systems.  Around 1998 I began helping out in the new computer lab with about 30 Windows XP desktop systems.  Eventually I was all alone as the other volunteers moved on.  In 2013 I replaced all the Windows XP systems with new Dell Optiplex systems.

The classes rotated in and out of the computer lab.  We had a projector in the lab and eventually deployed Smartboards in the classrooms.

Now that we had LCD displays and got rid of the CRT monitors the heat build-up in the room was mitigated.  These were very nice systems.

Also around this time I deployed about a dozen laptop computers for the staff and deployed a home-made version of  PoE Linksys Access Points.  Since funding was limited I asked for donations of Linksys WRT-54G routers.  I deployed 6 of them in the hallways.  I powered them up over the ethernet cable with a home-made 14v power injector, powering the devices over the unused pairs in the CAT-5 wire.  We used this fine until the Chromebooks came and taxed the Wifi throughput.

This was from the Ribbon Cutting Ceremony in 2013 for the upgraded computer lab.  In the front row L-R that's me, Principal Mark Monnerat and Pastor Fr. Joe DiSciacca with teachers in the background.

In 2014 I installed 63 Chromebook computers.  This also required a major building Wifi upgrade.  Here is one of the two Chromebook cabinets used to store them when not in use. When these cabinets arrived they were unloaded from the truck and into the boiler room!  When I unboxed them I realized how heavy they were.  I could not carry them up the stairs to the second floor and there was no elevator.  It was Saturday and I was all alone.  What I did was pretty clever.  I rolled them to the stairs and placed a very sturdy piece of carpet on the stairs.  Then I rotated the cabinets end-over-end up the stairs, like rolling a ball uphill.  Since there was nothing in the cabinets yet my only goal was to get them upstairs without damaging or scratching the cabinets.

The Chromebooks arrived in boxes that looked like pizza boxes.

There were two cabinets that were needed.  Here I have 63 power supplies on top that need to be installed and wired into the back of the cabinets.

There were convenient mounting brackets in the rear.  It was very time consuming to wire them all neatly.

The Chromebook Project turned out nicely.

The Chromebooks required upgrading the building Wifi system.  I purchased some Unifi Access Points replacing some of the old Linksys devices in the hallways and installing dedicated Access Points inside each of the upper grade classrooms using the Chromebooks.

I had to partially re-wire the network cabinet to provide for the new Access Points and the Power-over-Ethernet injectors.

Of course I don't purchase pre-made cables.  I make them all cut to length with connectors manually installed.

It was very rewarding to see the results of my work during my time at St. Joseph School.

It was nice to see first hand the students adopting the new technology.  The teachers had a lot to do with this success because of the hard work they all expended getting not only the Chromebooks up and running but also adopting Google Apps for Education. 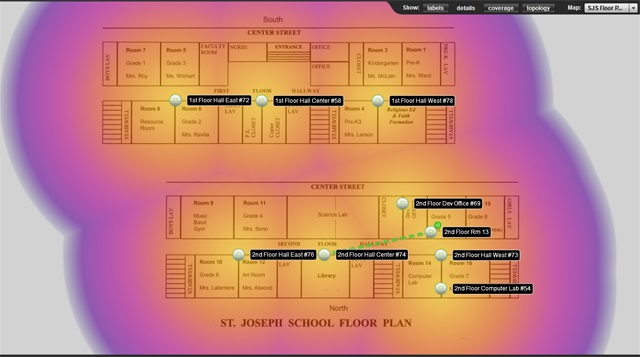 Here's the display of the Wifi coverage map of the first and second floors of the school.

This was quite a ride and such a great experience. I had fun doing what I love to do with support from two principals and two pastors. I pretty much had a free reign and saved the school and church a ton of money.  After a few years I had everything set up for remote access.  Rarely did I have to make a trip into the school to resolve problems. I will miss the great staff and the kindness and appreciation extended to me.