In the spring of 2010 I completed an extensive upgrade of the sound system at St. Joseph Church in Bristol CT.

The article below is probably way too technical for most.  Here's a quick overview of what we had and what we have now.

The original system was installed around 1986 when the worship space was renovated to conform with the requirements of the Second Vatican Council.  The original system used proprietary and now obsolete microphones.  The microphones are no longer available.  There were only provisions for a total of 8 microphones.  We had Cantor, Ambo (Pulpit), Altar, Priest, two Choir Loft, and two other jacks.  The system was designed for speech.  Each mic would automatically turn on or off when spoken into.  If these mics were used for singing the music would sound choppy.

Some time around 1993 Rick Swenton made some modifications to allow the mics to reduce in volume instead of completely shutting off.  He also added some temporary connections to allow standard mics to be used.  We frequently needed a second cantor mic, many mics for the Spanish musicians, mics for instruments, and for occassional soloists.  We would have wires running all over the floor with duct tape to prevent people from tripping.  It was ugly and problematic.

With the choir spending a fair amount of time in back of the altar there was no way for the choir to hear what was going on during the Mass.  A temporary speaker and amplifier was set up.  We did this with old, used equipment.  More wires.  More things to go wrong.

Our musical repertoire included more regular guitar accompaniment which required a mic.  A temporary arrangement provided amplification for the guitar but the sound came out of the speakers in the church.  A better arrangement would have the guitar sound coming from the piano area. 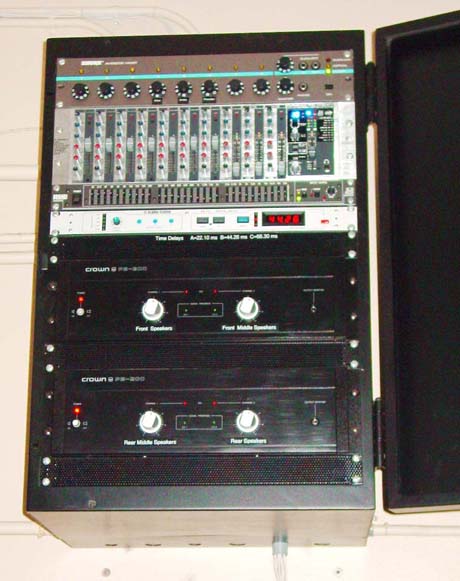 The original system is pictured above and still in place in the sacristy.
Heres what's currently in that cabinet from top to bottom:

Several enhancements were needed to improve the system and allow flexibility for speaking and musical use.  We needed compatibility with standard microphones, especially since the expensive AMS mics are  obsolete.  We needed more mic jacks to eliminate the ugly wires we always had on the floor.  We needed the ability to provide a monitor speaker for the choir which spends a fair amount of time in the area behind the altar.
Parishioners Paul Contrastano and Rick Swenton began to architect the upgrades that would include installing hundreds of feet of cable in conduit and designing a new system that would provide versatility and flexibility while being able to re-use as much of the old system as possible to save money. 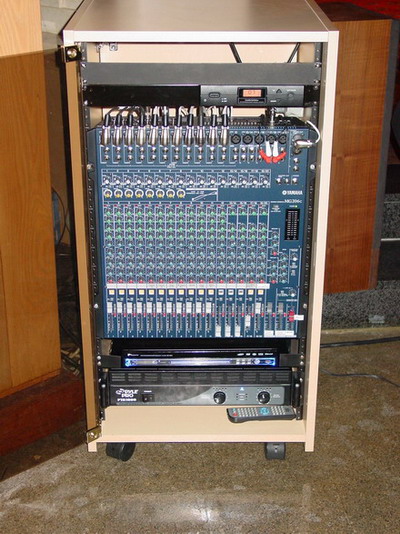 Here's the new equipment cabinet that was added and located near the organ console behind the altar.  It is an attractive oak cabinet with a locking rear door and a smoked plexiglass locking front door. You can see from the photos that the cabinet blends well into the existing environment, especially with the doors closed.

This new cabinet houses a 20 channel Yamaha audio mixer, a CD Player, and a stereo power amplifier for monitor speakers. Locating the cabinet here allows us to set the mic gains while we are within the acoustic environment.  In the past we had to go to the sacristy to make adjustments and we could not hear what we were doing.

Becuase we installed a large number audio cables between all the new jacks, the new cabinet, and the old cabinet in the sacristy, it made it very easy to design a very cost effective solution that continued to use all of the old system.  The Sure AMS mixer was still being used for three existing AMS mics:  the presider's chair, the altar and the ambo.  The output of the AMS mixer in the sacristy was routed to the new Yamaha mixer in the new cabinet.  All the new standard mics along with the wireless receiver come into the Yamaha.  The main output of the Yamaha gets sent back to the sacristy (where the AMS used to go) to drive the equalizer, time delays and power amplifers. 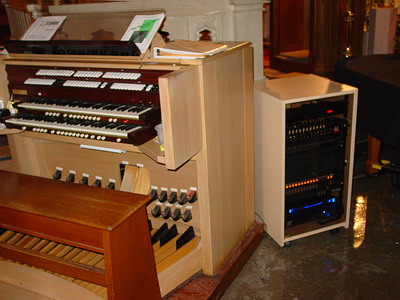 Also in this cabinet is a new Audio-Technica wireless microphone receiver.  When the FCC mandated the change-over to digital television it took a block of TV channels away from the TV industry and gave them to the two-way radio industry.  Our old wireless mic was on one of those former TV channels and it was going to be illegal to use it after June 12, 2010. So a new wireless mic system was included in the upgrades.

As part of the new system design, care had to be taken when selecting a new wireless microphone.  Wireless Mics operate on TV channels, so it's important that you select a mic that can be set to a TV channel that does not have a TV station operating on the same channel in range of our church.

The Yamaha mixer has 8 channels of compression along with low / mid / high equalization on all channels. 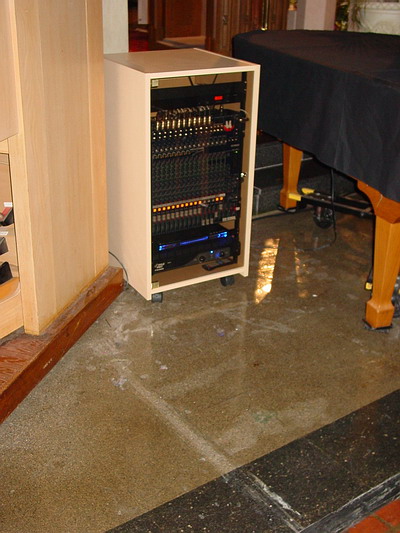 The final design piece was to provide a way for both sound system cabinets to power up at the same time without running costly AC power lines around the church.  There were plenty of extra audio lines run between the cabinet.  It was a simple task to use one of them as a DC control line.  Inside the new cabinet we installed an outlet box with a soid state relay.  A 9 volt DC signal will silently turn on the relay and provide power to the cabinet.  Inside the sacristy cabinet there is a small 9 volt AC power cube that comes on with the cabinet wall switch.  Whenever someone turns on the sound system with the wall switch in the sacristy the new cabinet in the sanctuary comes on too. The final component of the upgrade was to add monitor speakers to the rear of the marble altar railing.  When the choir sings or rings handbells from this location it was almost impossible to hear what was going on at the services.  We added four monitor speakers to reinforce the sound in this area.  Two are on the middle section of the railing, #1 and #2. Then moving to the right towards the organ console  is Speaker #3 angled toward the area where the choir sits and also covers the organist position. Finally Speaker #4 is angled at the piano and instrumentalist position.  These speakers are white and blend into the architecture quite well.  The wiring was carefully hot-glued to the marble to be as inconspicuous as possible.  One hole was strategically drilled into the marble ledge under Speaker #1 to allow the longest wire to be run unseen under the marble ledge. 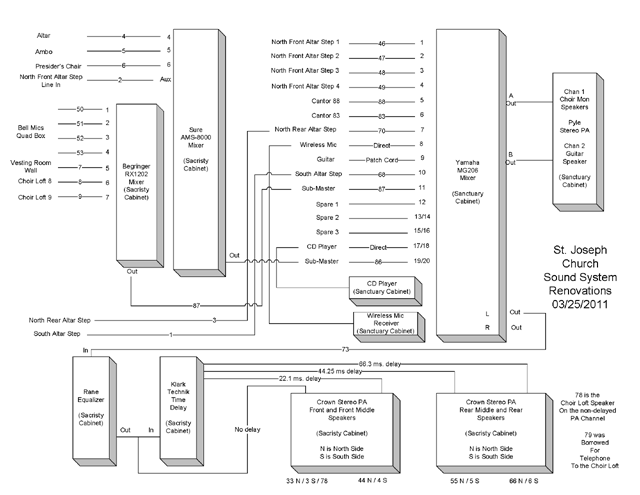 Here's the block diagram of the new system.  Click Here for a more readable PDF version.  The new components are in the Sanctuary Cabinet.  The components from the orignal system are still in the Sacristy Cabinet.