It's the middle of April and we've had some hot days in southern New England.  I became motivated to install some of the window air conditioners.  Good thing I decided to do this early.  This is a fairly old Frigidaire 5,000 BTU window unit. 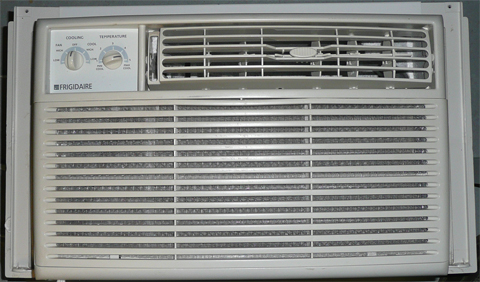 After I mounted it I powered it up.  The compressor started but the fan was running at an unusually low speed.  Upon shutdown the compressor would not restart even after a 20 minute wait.  It just sat there and hummed.  Not good.  My first test was to remove the front grille and see how well the fan rotated.  The squirrel cage fan rotated smoothly and freely.  It coasted to a stop after a few seconds.  No mechanical restrictions were noted.

My next test was to see how much torque was being developed by the motor.  I held the fan stopped and then turned on the power at high speed.  The fan barely started after I let it go.

Finally I decided to try to make the fan run in the wrong direction.  It would run backward for a short while with the power applied.  This clearly told me I was dealing with a faulty starting capacitor. 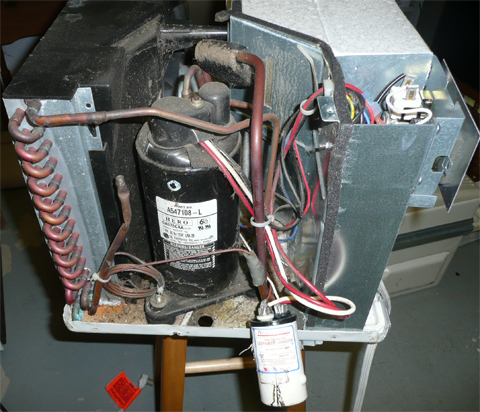 The capacitor was mounted with a clamp to the sheet metal wall between the compressor and the evaporator coil.  Here the capacitor is shown removed from the clamp and hanging down by the wires. 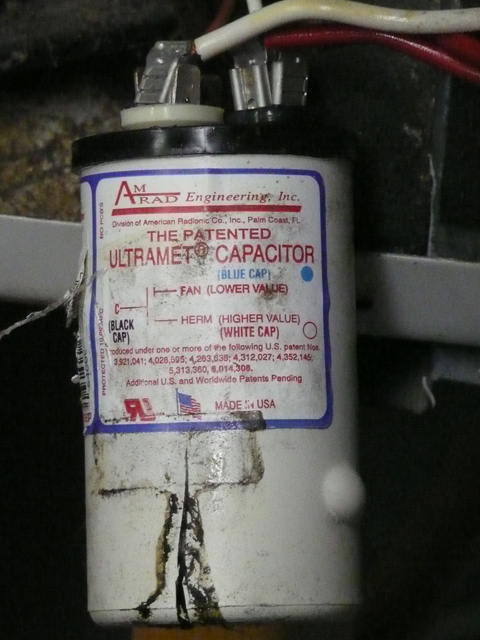 If you look closely at the bottom right you will see a blister - a bulge coming from the cylinder.  You can also see signs of chemical leakage.  All these are indicators that the capacitor is defective.  It turns out this is a dual capacitor.  It has a 5 microfarad capacitor for the fan motor and a 35 microfarad capacitor for the compressor motor.  Now it became clear why the compressor had a hard time starting.  It is very likely both internal capacitors are bad.

It turns out this capacitor can be purchased online for about $12.  I found them on Amazon!  I ordered two because I have another identical air conditioner and I can optimize the shipping charge by getting two. 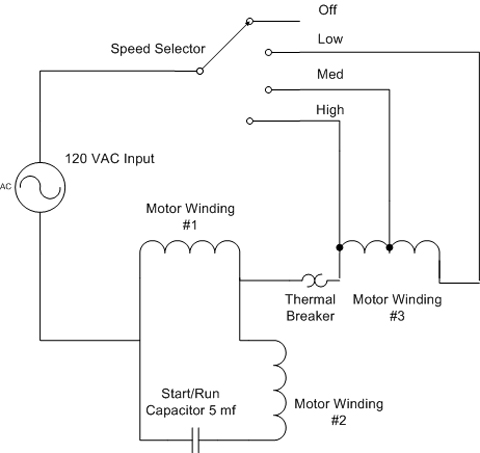 Now on to some theory.  Here is the blower motor part of the wiring diagram for this air conditioner.  This configuration is called a Permanent-Split Capacitor Motor (PSC Motor).  It is also sometimes called a Capacitor Start and Run Motor.  This configuration is frequently found in blowers and fans, air handlers (central air) and even ceiling fans.

All three motor windings are identical. In another life this motor is really a three-phase motor but in this application it is powered from a single phase 120 VAC power source.  Motor Winding #1 is the primary winding.  Motor Winding #2 is the start winding.  Unlike the Single-Phase Induction Motor found in devices like electric saws and water pumps this PSC motor keeps the start winding and capacitor in the circuit all the time, even after starting.  This means that a good capacitor is needed to keep this motor running and not just for starting.  The second winding and capacitor not only start the motor and help keep it going but also they determing the initial rotation direction.  If you want to reverse the direction of the motor, just move the capacitor to be in series with Motor Winding #1 instead of #2.

Normally to make a three phase motor into a PSC motor two of the three windings would be connected in parallel and the third one would have the start/run capacitor.  In this case the thrid winding was used as a speed control.  By applying the voltage to the motor through the third winding you can achieve a low and medium speed.  By bypassing the third winding (selecting the high position on the switch) you achieve the fastest motor speed.

An advantage of the Permanent-Split Capacitor motor is that the start/run winding and capacitor cause the motor to be self-regulating at a constant speed even with mechanical load changes within limits.  In this configuration there is always 1 to 2 amps of current passing through the capacitor.  This is normally not enough to make the capacitor heat up but it does explain why these capacitors don't last as long as ones in other applications such as filters in power supplies.

Notice there is a thermal breaker in series with the circuit.  This will prevent overheating or fire in case of a malfunction.

Working with electricity is dangerous.  Even if you don't kill yourself from electrocution you could cause a house fire.  Please use common sense and defer to the experts when in doubt.  Always replace parts with the exact replacement part or another part with the same specifications.

Those who know me know that I am a big proponent of DIY (Do-It-Yourself).  That does not mean I am not a proponent of qualifications and education.  If you are interested in learning more about HVAC (Heating, Ventelation and Air Conditioning) and possibly considering a career in this field here's a web site that could help you.  HVAC Ed has been created to be the definitive source for those looking to go into a career in HVAC, or even for those just testing the waters.  Their goal is to provide information on this career choice, the options of schools, information on financial aid available, and job and financial projections for the future.  Click Here to check them out.