I Think I Broke a Tooth

I Think I Broke a Tooth

Yeah!  Maybe even more than one!

So I get on my Rear Engine Riding Mower and take a pass around the front garden.  All of a sudden the mower starts to pulse rapidly and make a banging noise.  I press the brake (which also disengages the clutch) and the mower starts to roll backwards downhill,  No brakes!  Fortunately I was able to steer the machine to the side without tipping over.  I pushed the mower into the garage.

Near the end of last summer the mower developed a pulsing in the drive system.  Now I know why.

Nothing is ever easy.  The transmission is not removable as a unit.  It is build as part of the side mechanical plate.  The whole right rear side of the mower is also part of the transmission.  Further, the rear axle is a dual split design.  (An axle inside an axle, split in the middle.)  This is so that the differential in the transmission can work independently on both wheels.  So after removing what seemed to be hundreds of bolts I finally got the transmission apart enough to see what was broken. 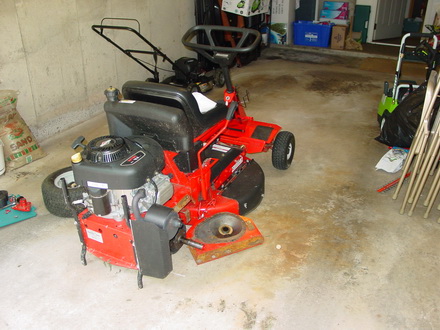 Here you can see the whole right side removed.  This right side is also part of the transmission housing. 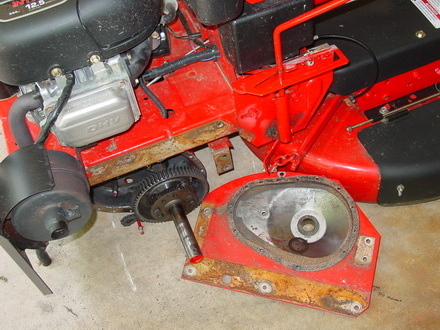 Here's a closer view showing the differential still on the axle.  You can see the gasket on the side plate. 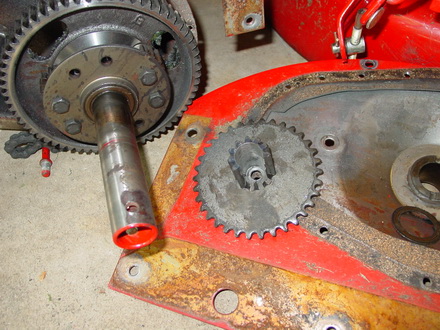 Here's the culprit.  The teeth on the small gear were ripped right off. 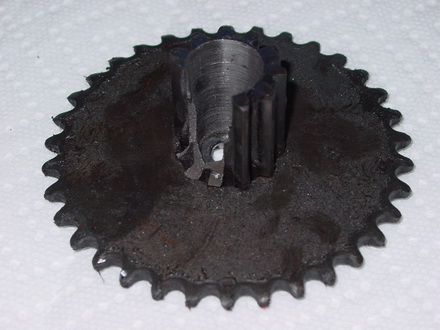 I was able to find this gear on the internet for about $9.  I also ordered the companion sproket and C-Ring (behind the sprocket) which was also $9.  What was maddening was the required transmisison grease which was $24.  Then I noticed there was no evidence of there ever being grease inside the transmission.  Later I noticed a fill plug on the other side of the transmission housing was missing.  I wonder if this transmission was ever filled with grease at the factory.  We'll never know.  Those are the risks of taking things apart yourself.  You can't go back and complain because they will simply say they don't cover disassembly by the home owner.

On the other hand, I always feel the educational part of the job is always worth the risk.  I'll let you know if the mower runs again after the parts arrive next week! 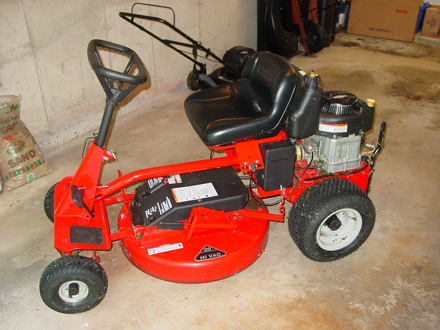 Done!  The reassembly with new parts was routine.  I was glad I also ordered the sprocket that was attached to the broken 11 tooth gear.  The gear was press-fitted into the sprocket and it was a good idea not to have used the old one.

While there was some evidence of a lubricant in the transmission it did not appear to have been enough.  The parts list called for 24 ounces of transmission grease.  This should have filled more than half of the transmission housing.  (Remember one of the two filler hole caps was missing.  I never saw any grease coming out of that open fill hole.)

After I installed the new parts and reassembled the mower (without the new grease) I tested the feel of the drive before starting the engine.  The mower rolled freely and smoothly - much more smoothly than before and even better than when it was new.  The clutch and brake engaged properly.  I started the engine and tested under power.  Still good.  Then I applied the transmission grease to the transmission and tested again.  The mower drive train was so smooth that the mower coasted for a few feet after being pushed.  After mowing the whole lawn I can say that the repair was a big success.  I can also say that the drive train is smoother than when the mower was new last year.  All these observations are pointing to a defect either in manufacturing or in dealer preparation since I don't know when the grease was supposed to have been applied.

This was another job that surely was educational and helped me grow my experience.  Jobs like this can make you even more willing to take on the next job which may be more challenging.