My general purpose receiver is the SDRPlay RSPdx software defined radio (SDR).  The latest version of the SDRUno software was released with support for many  new features. I stumbled upon the plug-in called ADSB.  It stands for Automatic Dependent Surveillance-Broadcast. It is a surveillance technology in which an aircraft determines its position via satellite navigation or other sensors and periodically broadcasts it.  It does this so that air traffic control and other aircraft can track it and know its position. Aircraft know their location using GPS.  The aircraft knows its altitude based on a pressure altimeter. The ADS-B transponder broadcasts the aircraft's ID and this three dimensional position (latitude, longitude, altitude) on 1090MHz or 978MHz.  This signal can be received by a radio within line of sight of the aircraft. ADS-B is required to be installed in all aircraft in US airspace as of January, 2020. 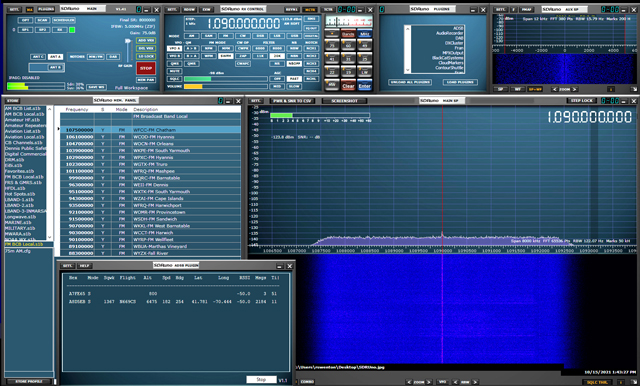 Here's a screen shot of my SDRPlay RSPdx receiver using the SDRUno software running the ADSB plugin and listening on 1090 mHz.  It is receiving the ADS-B signal from an aircraft whose ID is N669CS. 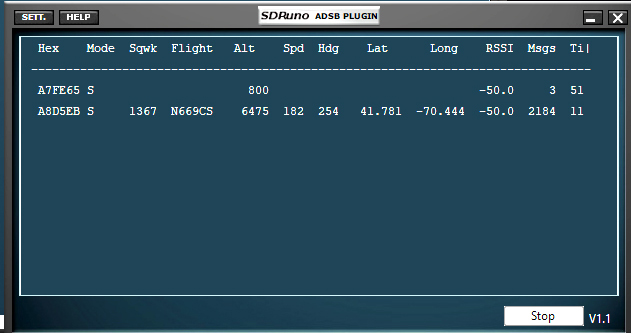 Here's a close-up of the data coming from the aircraft N669CS as received by the ADSB plugin.

A free software program called Virtual Radar Server is installed on my computer. The ADSB plugin feeds the aircraft's raw data being received at my house and plots the real-time position of the aircraft on a map.  The aircraft icon moves on the map as its position changes.

Here's a close-up of the details provided by the Virtual Radar Server which shows that it is a private aircraft and the manufacturer. It's amazing how many commercial airliners I can receive going in and out of Logan Airport in Boston.  It's interesting to watch their flight path and then switch to the shortwave aeronautical frequencies to monitor their radio communications as they fly over the Atlantic Ocean.

Here's a list of the aviation frequencies stored in my SDRUno. You can see they have multiple shortwave frequencies to use for optimal propagation depending on the time of day.  High frequencies for daytime and low frequencies for nighttime.  It's amazing what can be done from home with simple equipment that was only dreamed about in the past.