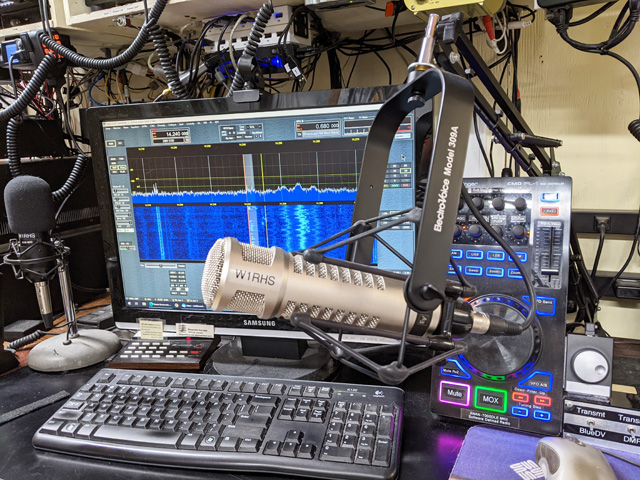 This article intended to be more of a philosophical discussion than a technical review.  When you are dealing with Ham Radio transmitters and receivers, your choice of microphone can be based on science or opinion or both.  There's no real right or wrong answer.  It's kind of like asking someone how to adjust bass and treble controls on a music system. Let's start with some technical background.

The Electro-Voice RE27 N/D is a professional grade studio/broadcast microphone. Some of its features include a powerful neodymium magnet and a reinforced diaphragm dome.  This offers increased sensitivity (up to 6-dB more output), undistorted output at high sound pressure levels and an extended high-frequency response.  The mic has a 5 kHz presence rise.  This gives the sound extra clarity.  Some people say you can just do that with an equalizer.  Sure, you can.  But there's something to be said about having that already present in the mic signal.  It is a large diaphragm cardioid dynamic mic.  It's sound fidelity rivals the best condenser mics.  Unlike condenser mics, the RE27 does not suffer distortion from close-talking nor does it suffer from the "proximity effect."  The proximity effect is a change in the sound caused by the closeness of the person's voice to the mic.  The proximity effect will cause a bassier sounding voice if the person close-talks the mic. Some radio personalities use this effect as a feature sound in their shows. This effect is commonly heard on some evening shows where the host does "pillow talk" by close-talking the mic. The RE27 maintains consistent quality independent of distance between the person and the mic.  Also unlike condenser mics, the RE27 has better off-axis sensitivity.  It has a hum-bucking coil.  This helps filter electromagnetic interference and can be especially helpful in transmitting environments.

The mic has a built-in blast and wind filter and a built-in shock mount.  It is unclear how effective these are.  I suspect they are better than nothing but not perfect.  I have seen applications that have external pop filters but have never seen foam wind screens on this mic.  My own application uses the Electro-Voice 309A shock mount suspension.  The mic has a balanced 150 ohm output through a standard XLR connector,

This mic is expensive.  It lists for $499 almost everywhere.  Used ones are typically found between $400 and $450.  It comes with a carrying case and a stand clamp.  The mic is large and heavy,  It weighs a little over 3 pounds. The 309A shock mount suspension adds another $99.  I have seen professional studios with and without the shock mount so it is unclear if it is really necessary. The shock mount adds another 7.5 inches to the distance between the mic clamp and the stand threads. That means the shock mount would either raise the mic 7.5 inches above the top of your desk stand or lower the mic 7.5 inches below the bottom of your dropdown boom mount. Also keep in mind that the shock mount will add to the already heavy weight of the mic,  I had to increase the spring tension on my dropdown boom.

If you use the provided mic clamp, you should know that it clamps to the rear of the mic. This means that the mic will be front-heavy on the stand. Most of the body of the mic has acoustic screens so you can't use a shock mount that clamps to the body of the mic without blocking the ports.  The rear body area has a small portion of solid space but the mic will still be front-heavy. The 309A shock mount allows the mass of the mic to be centered and balanced on the stand mounting point.

Click Here for the RE27 N/D Mic Data Sheet

Click Here for the 309A Shock Mount Data Sheet

It is my belief that you should strive to have the finest possible audio quality to send to your transmitter. The problem arises when different transmitters and receivers have different capabilities.  Modern transceivers from companies like Kenwood, Icom and Yaesu deliberately restrict their transmit bandwidths.  Sometimes, this limit could be as low as 2.4 kHz and even lower for SSB.  This creates courteous "good-neighbor" signals on the band. They are spectrum efficient and generally non-interfering if the audio is adjusted properly.  Some hams use ancient relics for receivers and transmitters,  There is a lot of equipment still being used today that was originally placed in service during World War II.  Much of this unmodified equipment will not have high fidelity receivers or will not be capable of full fidelity transmit.  Most of these users will not be able to tell the difference between your RE27 mic and almost any good basic mic.  Even the factory hand mic on the Icom IC-7300 sounds great to most people.  Why would you spend the money on a mic like the RE27 if most people won't notice?

Stated again, it is my belief that you should strive to have the finest possible audio quality to send to your transmitter.  My main transceiver is the Apache Labs ANAN-7000DLE MKII.  It is a software defined transceiver.  As such, all of its operating parameters are controlled by software.  With this radio I can open up the transmit bandwidth to accept the rich fidelity of the RE27.  The transmitter will still be able to be a "good neighbor" on the bands by not exceeding the set bandwidth. I will still have the same problem at the other end.  The other folks still have inconsistent receive fidelity.  At least I know at my end it is the best it can be.  The real joy comes when you and the other person both have the ability to run high fidelity audio.  This type of audio is not suited for weak signal work or seeking distant contacts.  It is meant for enjoyable conversation. Sure, the signal is wider than AM on some modern radios like the ICOM 7300, but with the SDR, the signal is tight and does not splatter adjacent users.

Is the RE-27 possibly the finest microphone ever made? Possibly. Do you need it? Probably not.  If you get it, will your world be changed?  Probably not.

Many users compared this mic with the Heil PR-40, the Audio Technica AT-2020, the Behringer B-1, and the Behringer XM8500 Ultravoice,   Various tests results did not reveal a clear winner.  That's probably because of human perception. The other mics suffer from proximity effect.  Radio listeners might not notice this unless the person transmitting is constantly changing his distance from the mic.  Many people are fond of the Behringer XM8500.  The Behringer XM8500 Ultravoice goes for about $20. Music vocalists say the XM8500 sounds as good as the industry standard Sure SM58 which goes for about $100. If you want a great dynamic mic that won't break the bank, the Behringer XM8500 is an excellent choice.  Another popular mic is the MXLBCD-1 manufactured by MXL, a division of Marshall Electronics, located in California. This is a dynamic broadcast mic.  It comes with a windscreen and internal shock mount. It retails for about $150 but I saw it on Amazon for $120 so look around.

Is the RE27 is worth the cost for Ham Radio use? Perhaps the answer is subjective. Is it worth it to you?