Please check the article "Last Updated" date above.  I have been periodically updating this article with supplementary information.  The main content is stable.

The ANAN-7000 can control the band switching of the ALS-1306 using its Open Collector (OC) Pins using a binary format. You can make your own data cable to connect the ANAN to the amplifier.  It will be a 5 conductor cable with a DE-9 connectors.

For many popular name brand transceivers you can purchase interconnect cables already made.  They can be costly and range from $30 to $90.  The Yaesu interface sends binary ABCD data.  The Kenwood interface uses serial RS232 data.  The Icom interface uses voltage levels.  The ANAN can perform band changing using ABCD binary over its OC Outputs.

From the ALS-1306 schematic the following control information can be sent into the DE-9 connector on the rear of the amplifier marked RADIO INTERFACE.  The control signal is binary. The logic level is TTL – 5v.

The ANAN does not have an output dedicated for band control of an amplifier.  However it does have 6 Open Collector (OC) outputs that can be programmed on a per-band basis.  You can assign OC0, OC1, OC2 and OC3 to represent the ABCD binary signal to send to the ALS-1306.  Open Collector means the output can pull a signal to ground (sink) when active but floats when inactive (no voltage coming from it.) The output devices are actually FETs rated at 25v 800ma.  The band switch control voltage in the ALS-1306 is TTL, 5 volts and is well within the ANAN FET limits.

Since the ALS-1306 Band Switching input is 5+ TTL the ANAN will allow the amplifier’s input pins to float up to 5 volts and can pull them down to zero volts.  This means the ANAN and the ALS-1306 can be directly connected between their DE-9 connectors.

For reference here is the ALS-1306 DE-9 pin definitions

* If JP1 is not in place inside the amplifier the ground connection on Pin 6 is really a 10 ohm 1W resistor in parallel with two 2.7v back-to-back Zener diodes.

When Ground is not a Ground

Here's the problem with the ground connection on pin 6 of the DE-9 connector on the amplifier.  Pin 6 does not actually go to ground as the RGND label suggests.  It goes to ground through a 10 ohm 1W resistor in parallel with two 2.7v back-to-back Zener diodes.  Pin 9 on the RJ1-B connector goes to the Control Board CB2 pin 9 of RJ1-A.  There is is called GND.  But it's only really ground if JP1 is installed.

So here's the thing.  If you want to use Pin 6 on the DE-9 as a ground you should install JP1 in the amplifier.  You could also do as I did and use the DE-9 shell as the ground on the amplifier side of the cable.  Since Ameritron never told me what JP1 and the 10 ohm resistor was for I decided not to use it and not to connect anything to it.

I just bothers me because 10 ohms is close to ground but it's not really ground.  What are those 2.7v zener diodes for?  Do they expect a +- 2.7v signal on this "ground" line?  How does the amplifier respond to that?

According to Mark at Ameritron, JP1 is involved with the ICOM Band Control interface.  The amplifier is shipped with JP1 removed.  ICOM controls the band change using discrete voltage levels that are closely spaced.  There is some kind of ground reference problem between the amplifier and some ICOM transceivers so they needed to raise the ground potential by a small amount.  If you want a "real" ground on pin 6 of the DE-9 connector then install JP1.  It probably will work fine without JP1 because of the common ground provided by the shield of the coax and any ground wires you attached to the amplifier and transceiver.  If you installed JP1 and later desire to use an ICOM interface for band changing you may have to remove JP1.

Wiring the Interconnect Cable for the ANAN-7000

You need a 5 conductor cable.  It’s a good idea to use a shielded cable.  I did not use one and have not experienced any problems.  I will probably make a new one with a shielded cable in the future. Connect the shield to ground at only one end of the cable.

Wire your cable according to the following chart.

* If you use a shielded cable connect the shield and the ground wire from the ANAN Pin 1 to the DE-9 shell at the ALS-1306 end. Alternatively you can install JP1 on Control Board CB2.

What is the purpose of the connection called OCRef on the Anan DE-9 Pin 2?

Next you will program the ABCD binary data into the Thetis OC Control screen. Keep in mind that the ANAN OC outputs are active low (negative logic).  That means that we need to invert the ANAN signal to achieve the desired binary value.

You program the OC Pins by band.  Keep in mind that the Inverted DCBA signal is applied to OC Receive Pins 1-2-3-4 as ABCD.  A binary 1 is a check and a binary 0 is no check.  This can be REALLY CONFUSING.  The wiring diagrams call the signals OC-0, OC-1, OC-2 and OC-3 but Thetis starts numbering them with 1.  (No OC-0)

If you don’t want to rack your brain about this just wire the cable according to my chart and program Thetis according to the screen shot.

Here is a screen shot of the completed programming.

Another point or contention is using the term BCD (Binary Coded Decimal) to define the control signal.  Technically this is not a BCD format signal.  BCD is not the same as Hexadecimal.  BCD is a way of counting in binary from 0 to 9. Nine in binary is 1001.  The next binary number is 1010. BCD numbers stop at 9.  You can see the bits to set the 6 meter band are binary 10 and that value is undefined in BCD.  1111 is also undefined in BCD. So even though Yeasu and Elecraft call this a BCD signal it really is not.  It's a 4-bit binary control. 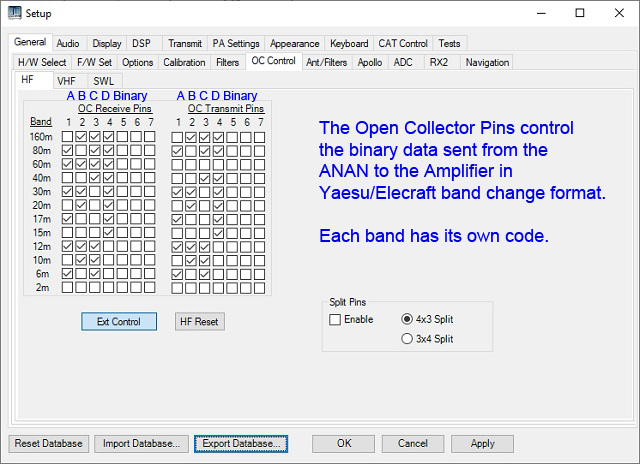 Plug in the cable and set the amplifier band switch to REM for Remote.  When you change the band on the ANAN the amplifier will follow and change to that band.

I believe this cable will work on the ALS-606 amplifier.

I believe this will work on older models such as the ANAN-200D by using a DB-25 connector instead of the DE-9 and wiring the DB-25 pins as follows.

* If you use a shielded cable connect the shield and the ground wire from the ANAN pin 25 to the DE-9 shell at the ALS-1306 end.  Alternatively you can install JP1 on Control Board CB2.