Please note that I am not an authority on this stuff.  I created this page to document some things I did so I would not forget.  I do not mean to disrespect the many subject matter experts who have done so much for the community and know so much more than I do.  Hopefully I have given credit and continue to give credit for other's work.

While I have good experience with the SDRPlay SDR Receivers and the SDRUno software this is my first experience with the Apache Labs ANAN 7000DLE MK-II Transceiver.  I thought I would begin to chronicle my path to set up and explore the transceiver and software. There are several fine setup and installation videos and tutorials online.  My presentation here is not meant to be comprehensive and exhaustive. I just wanted to document the places that slowed me down or required further investigation.

The picture above is the model I purchased in February 2020 with the black finish and without the internal computer.  Here is the Technical Data Sheet from Apache Labs.

This is an AMAZING radio.  If you are looking for a plug-and-play radio that will work out of the box this one is not for you.  If you want to maximize the most enjoyment of this radio you will need an understanding of computers, networking, configuring software and updating firmware.  If you are open to learning and willing to spend the time to learn it can be a very rewarding and fulfilling experience for you. Everything you learn will build upon your foundational understanding and make each next step easier. It doesn't take long to get this radio on the air.  There are several preset profiles in the software you can use to get you started,  If you are not comfortable around computers, networking, finding, loading and configuring software you will likely be frustrated.

The transceiver does not come with documentation or software in the box.  Everything is available online but it is not all in one place or conveniently packaged.  It's almost as though you have to already know why you want this radio and how you plan to learn how to use it before you buy it.  It's worth the effort to learn it. I have heard complaints from some who ordered this radio expecting it to be plug and play out of the box. One particularly misunderstood requirement is that you will need a respectable computer and a gigabit ethernet connection between the radio and the PC.  You can use a 100 megabit network but you won't be able to use the latest and most robust software.

Here are the links for the two different 7000 User Manuals on the Apache Labs website.  They are 60 pages long.

At the lower left of the front panel there are two LEDs.  The left-most one with the Power Icon is the power LED.  The one next to it with the Half-Moon Icon is the FPGA Heartbeat LED.

The manual for the 7000DLE MK-II (File 1027 with the MK-II in the filename) says about the Field Programmable Gate Array (FPGA) Heartbeat LED: Note: There is an FPGA “Heartbeat” LED located on the back of the Transceiver grill that will blink every second to indicate that the FPGA firmware is properly installed and active for communication with the LCD Panel microprocessor.

The LED blinks whenever the power is on to indicate the FPGA is alive and active.  In case of something like a bad or failed firmware load the LED would stop flashing.  Keep in mind the LED will flash in either position of the Bootloader Switch.  The control software (PowerSDR, Thetis, SDR Console) will not connect to the radio if the switch is in the Bootloader position.

The other two LEDs on the front panel are in the Ethernet Jack.  The left one indicates a connection with a solid light,  The right one blinks with network activity,

The 7000 came with a power cable.  It had a Powerpole connector on one end that fits the power jack on the transceiver.  The other end of the cable was not terminated.  I crimped two round terminal lugs at the end of the cable for connection to the terminal studs on my power supply.

Caution!  There are two 1/4 inch speaker jacks on the rear panel.  These are TRS (stereo) jacks.  The speaker output is not grounded.  It is a two wire floating signal (bridged output) connected to the tip and the ring of the jack. Neither speaker wires are grounded!  So connect your speakers to the tip and ring on the plug.  Do not connect to the sleeve - the longer grounded connection.  DO NOT USE A MONO (tip and sleeve) /4 INCH PLUG!  The sleeve will short out half of the output channel and possibly destroy the audio amplifier chip.

On my 7000DLE MKII the L and R speaker jacks were not wired properly at the factory. The jacks were actually Left Channel only in parallel.  I had to open the transceiver and swap the wire that was plugged into the Orion board J8 and moved it into J9.  Now I have L and R speaker audio on the rear jacks.  Here's the link to the post on the Apache Labs Forum:
ANAN-8000 - Rear speaker out L-R - apache-labs.com

PowerSDR has a VAC feature that allows you to use a mic and speaker connected to the sound card of your computer.  This is a nice feature.  Your mic and speaker audio are handled over the ethernet connection between the radio and the computer.  No extra audio cables!

The microphone control button (on/off), Mic Gain slider and Main Volume volume slider do not apply to a mic and speaker used through VAC.

Setting Up the Audio Chain with CFC Audio Tools

Rob, W1AEX has a great tutorial on Set-Up Guide with CFC Audio Tools located at his web site here.  You will need to spend some time going through these settings.  It will help you achieve amazing transmit audio quality. 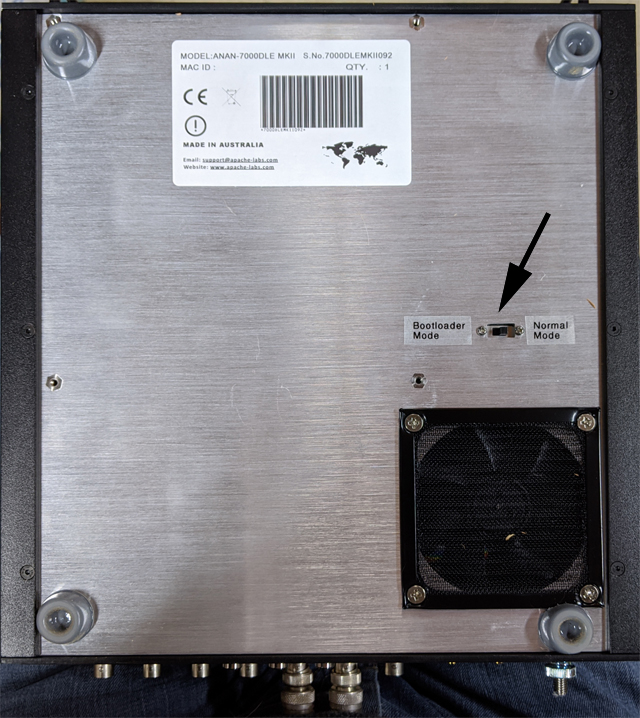 There is a bootloader slide switch at the bottom underside of the transceiver.  It is not marked.  I placed two labels at this switch to indicate the mode.  On my radio the bootloader mode is invoked when the switch is moved to the center of the radio.  Normal mode is with the switch towards the outside edge of the radio.  You would need to move this switch to the bootloader mode to change things like the IP address or to load firmware. I have read in the forums that this switch may be installed either way at the factory.  You should determine the positions for your particular radio and label the switch to avoid confusion later.

If for some reason the transceiver is "not found" by a previously working control software such as PowerSDR or Thetis you should check the position of the bootloader switch.  It's easy for this switch to change position if you moved the radio.  The control software will not run with the switch in the bootloader position.  The FPGA LED will flash normally with the switch in either position with valid firmware loaded.

Protocol 2 is explained here on the Apache Forum

Rob, W1AEX has an excellent tutorial on setting up the ANAN network connection.

The Bootloader program seems to require the word "Metis" somewhere in the filename of the firmware or it can't be selected.

PowerSDR is the older software that was most popular in the past.  Many still use this.

Thetis is the newer software and is more robust and richly featured.

Thetis Update 12/31/2021
There as been recent significant development of Thetis 2.8.11 by Richie, MW0LGE. You can "hot patch" these updates into your existing 2.8.11 installation until the official update release is finished.

GitHub Link to Download Thetis 2.8.11
Thetis 2.8 supports either Protocol 1 or Protocol 2.
There are versions for 32 Bit or 64 Bit Windows systems.

SDR Console is another fine software program to control the ANAN SDR.  It requires Protocol 2 firmware.

Here's the ANAN with the Astron power supply above it with the antenna tuner and the Ameritron ALS-1306 solid-state amplifier below.  Behind the amplifier are two SDRPlay receivers, an ICOM PCR-1000 receiver and an MFJ-1708B SDR Antenna Switch. That switch allows the SDRs to share the ham radio antenna and protect the SDRs when the antenna is used for transmitting. 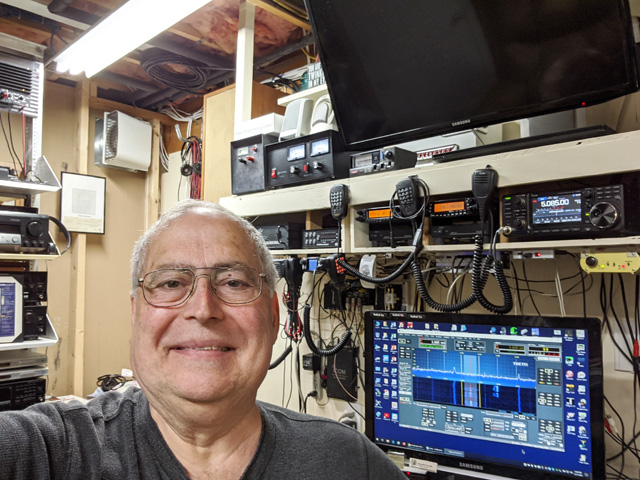 Picture of the operating position.  The Anan 7000 is on the lower shelf to the left.  Thetis is up on the computer screen.