My Ham Radio friends and I have finally moved into the digital world.  Just as audio tapes gave way to Compact Discs and DVDs the analog radio world is gradually giving way to digital technology.  In Amateur (Ham) Radio we have had digital radios for some time, mostly in the form of the Icom D-Star system.  This is probably the more popular system with many listings in many states.  In the commercial radio world there are several digital systems such as the more popular APCO Project-25 (P25) and NXDN®.  Unlike P25, NXDN® is an open standard with strong support from Kenwood and ICOM. 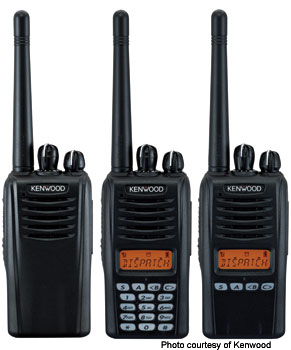 In the Amateur Radio service we do not take advantage of trunking technology at this time.  It's bad enough when we get bitten by the digital bug.  It's even worse if we start talking multiple repeater sites with towers, internet connections and electric bills!

In the old days we used to have to purchase crystals for each channel we wanted to opereate on.  Later the manufacturers developed frequency programmable radios that could change channels using the front panel keypad.  Because these Kenwood radios are business radios they are not user programmable.  You need to purchase the programming software and interface cable and program the channels into the radios with a computer.

The nice thing about these radios is that they are FCC type accepted for commercial service.  That means if you have a business radio license you can program the radio for your frequency.  If you also have a Ham license you can press the radio into dual service and use the same radio to chew the fat with your friends on the Ham frequencies.

One of the recent issues we have been exploring is the audio quality in digital mode.  The audio in a digital system needs to be converted from analog (microphone) to digital (computer) => transmitted and then received over the air => then converted from digital and back to analog (speaker).  They do this in Kenwood NEXEDGE® systems using a chip called a Vocoder (voice encoder/decoder).  Because of all the conversion and compression required to make your radio and audio signal fit in the narrow band channel slot there is a risk of poor audio quality.  Not so in NXDN.  It really sounds pretty good.  The radios and the repeaters have some configurable settings for the audio characteristics.  It all goes back to the old Miller Lite commercial:  Less filling or tastes great?  If you set the audio to favor the high frequencles it will "punch" through in noisy room environments (such as police responding to bar fights).  Some of us (me) will dislike the high boost and favor a bassier response.  I thought the bassy response sounded more natural but Clem preferred the high frequency punch.  The nice thing is that there are configuration settings in both the radios and the repeaters.  In the radios you can independently configure the audio response for both the transmit audio and the receive audio.  We are currently experimenting with all the different settings, waiting to see how long Clem's patience will last.  We may ultimately leave all the radio settings flat and make one preferred setting in the repeater.

The first time I used digital mode I was annoyed with the fact that I could not tell when the person talking to me was done with his transmission.  The background audio is so quiet you can't tell if the repeater is still transmitting unless you hear someone speaking.  The NEXEDGE® radios have the ability to generate an audio beep at the end of the transmisson to tell the other party you released your transmit button. (In the old CB Radio days they used to call this annoying tone a "Roger Beep!") Cliff and I turned this feature on but it didn't last long.  It was as annoying as the Roger Beep.  After a few days of using the digital mode you get used to how quiet the background is.

Another interesing thing is the overall range using these radios in digital mode.  I expected the digital range to be less than analog.  What I experienced in real life was confirmed in a graph I found in an NXDN White Paper.  When you reach the absolute limit of coverage the signal goes from 100% to 0%.  You are either totally good or you get nothing.  But when you are good, you are 100% good.  In the analog mode Hams rate FM signals as a percentage of Full-Quieting.  That means a 100% signal is called Full-Quieting (no noise).  A 50% quieting signal is 50% noise, and so on.  In the digital world the received signal is 100% full quieting all the way down to when you drop out of the repeater.  That's because you are listening to the digitally reconstructed, error-corrected signal and not the analog counterpart with all the static and dropouts.  So while an analog signal might have an edge on reaching out further in range (with a comparably noisier signal quality)  the digital signal has the advantage of being 100% quality over its entire coverage range.

We have a lot more things untouched that are left to explore.  One is Over the Air Programming (OTAP).  This is where a certain master radio can be used to clone its configuration to other radios in the fleet.  Another is internet connectivity and linking of repeater sites over the internet.