On Thursday, June 14, 2012 at 10:07 am Eastern Time, Evans, KD4EFM and Rick, WA1LMV (me) exchanged a conversation over ham radio.  This may not sound like a big deal except for the following:  Evans was in Lakeland, Florida and I was in Bristol, Connecticut.  That also may not seem unusual since Hams can talk all over the world.  But we were using hand-held digital radios (walkie-talkies.) These handheld radios are linked to repeaters (towers) in our local respective towns.  Last night we successfully linked Cliff's Bristol CT repeater K1IFF/R on 449.975 MHz with the Lakeland FL repeater N4KEG/R on 146.655 MHz over the internet.  The conversation was crystal clear and sounded much like a conventional wired telephone call.

Evans, KD4EFM, did most of the heavy lifting on this project.  He was the one who was gathering configuration information, hounding the Kenwood engineers, setting up a test environment, and promoting community enthusiasm even on a cloudy day.  Cliff, K1IFF was next, having offered his repeater as the second site and providing the necessary hardware, including a six-pack of Corona to bribe the network engineer.  On the Connecticut end, Don, K1ZSG, was also instrumental in providing hardware and technical support.

This is the first known interstate contact using this Kenwood NXDN digital technology.  While there are digital repeater systems specifically marketed for Ham Radio (such as D-Star), these NXDN systems are commercial systems and are not targeted for the hobbyist.  They are typically used for police, fire and business applications.  Often a city will set up several of these repeaters around town to support public safety communication.  Several systems are used to improve coverage, just like cell towers.  The towers are linked together over a private digital network so everybody across the city can hear the transmissions, even when using handheld radios, no matter where they are located in the city.

We wanted to try to use this technology to connect Cliff's system in Connecticut to the N4KEG system in Florida where Evans is based.  One of the biggest challenges is that the digital link would not successfully connect the two repeaters together over the public internet.  The NXDN digital protocol required a dedicated point-to-point network connection.  The internet, along with the internet service providers (AT&T, Comcast and others) introduced too many things that altered the data packet flow between the two sites.

Public Safety systems either pay the phone company for expensive dedicated data links between the towers or they install a microwave radio link if the towers are within a line-of-sight distance apart.  In order to use the less-expensive internet to make the connection we programmed our routers to establish a Virtual Private Network (VPN) connection between the Connecticut router and the Florida router.  This established a direct virtual connection between the routers at the two repeater sites.  Now the repeaters "thought" they had a dedicated connection.  With careful coordination of configuration settings we were eventually able to establish a data link and a digital audio conversation between Florida and Connecticut.

Other challenges were dealing with Cliff's DSL connection which has a dynamic IP address as well as changing the DSL modem to bridged mode.  Another challenge was not to disrupt the home internet service and home network where other more important (non-Ham) people rely on the internet.  More details and diagrams will follow shortly .....

In addition to the digital audio conversations we have other data passing on the network.  Our FCC call signs appear on the other radio displays when we are talking.  We can send short text messages to each other's radios.  Evans was also working on an application that would read our GPS coordinates transmitted by our radios and we could bring up a map that shows where we are all located on the planet at that time.  I know it's overkill.  Someone asked Evans why he would want to do that and he said, "Because we can."  I agree!

The repeaters and the handheld and mobile radios are programmed by connecting them to a laptop computer using a special USB programming cable.  The laptop runs a special programming software.  Using this software, almost any available option can be changed in the repeater or in the radios.  We can set the frequency of the repeater (channel) and program a large number of other frequencies in the radios.  That way we can use them on other repeaters or direct from one radio to another.  We can select digital mode or the older analog mode to use conventional repeaters in our area.  There are dozens of screens of configuration settings to consider.

Our next step is to establish a link to another NXDN repeater system in Chicago.

It should be noted that our successful link is between two Kenwood NXDN repeaters.  There are other system types by other manufacturers such as Motorola and ICOM.  The digital protocols are not the same and it is still unlcear if a link is possible to other protocols.

Cliff and I have been building repeaters since the 1970s.  It was fun to be back with him again working on another repeater problem that night.  The difference was there were no smoking soldering irons on the workbench.  Instead it was strewn with laptop computers and network cables.  Some things don't change though.  We still had plenty of beer. 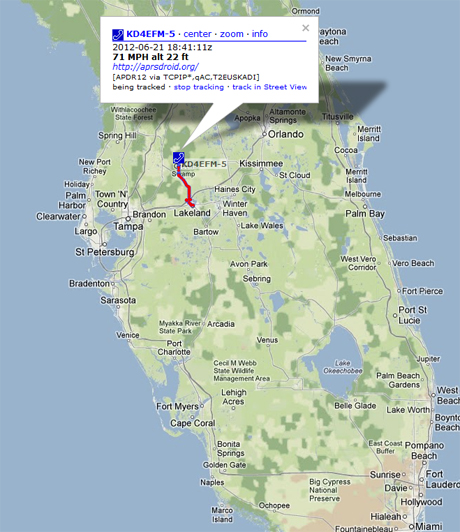 Here's the image from the website http://aprs.fi where we pulled up Evan's callsign while he was on the road and were able to see where he was.  His radio sent his GPS coordinates over the ham radio frequency and into the repeater.  The repeater conveyed the data to the web site.